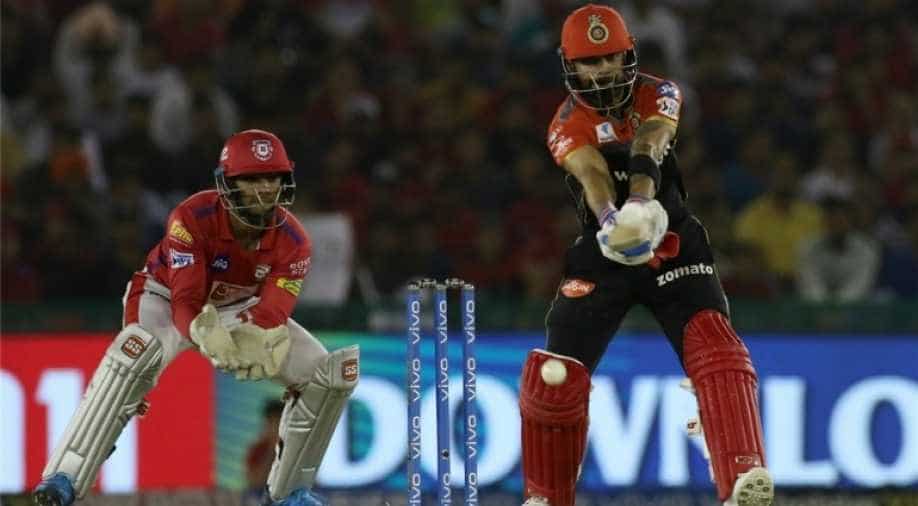 Bangalore''s Virat Kohli in action during the 28th match of IPL 2019 between Bangalore and Punjab. Photograph:( IANS )

Bangalore defeated Punjab to register their maiden win in the 12th edition of the Indian Premier League at Punjab Cricket Association Stadium on Saturday.

The duo in the middle added 85 runs for the second wicket to whip off the blurry lines in their winless streak so far.

Kohli welcomed his 37-ball fifty but soon after Mohammed Shami trapped him on a short ball as the Bangalore skipper pulled straight to M Ashwin for 67.

Marcus Stoinis and De Villiers in the middle inched closer to the victory as Bangalore needed 20 runs from 12 balls.

In the penultimate over, Shami conceded 14 runs, including a crucial six from De Villiers, which lead to six runs required from as many balls.

R Ashwin handed the last over duties to Sarfaraz Khan but a determined Stoinis took Bangalore over the line and sealed the first victory for his side from seven games in the league.

Earlier, Chris Gayle's 64-ball 99 not out powered Punjab to post 173 for the loss of four after sent in to bat.

The 'Universe Boss' would have returned for a golden duck off Umesh Yadav in the first over had Bangalore reviewed lbw.

Despite getting a lifeline, Gayle ran out of overs otherwise would have scored his seventh IPL century.

Gayle used different gears for different stages. Punjab had a decent start but Gayle stole 24 runs from Mohammed Siraj to place the host at 60 for the opening wicket.

Bangalore bounced back in the game, for a while, as Yuzvendra Chahal got KL Rahul (18) stumped and later cleaned up Mayank Agarwal (15).

Gayle towards the end got another opportunity as Kohli dropped a sitter at long-on. Siraj leaked 11 runs in the last over and Gayle lifted Punjab to a challenging total.

Bangalore will next play against Mumbai on April 15, whereas Punjab will face Rajasthan on April 16.