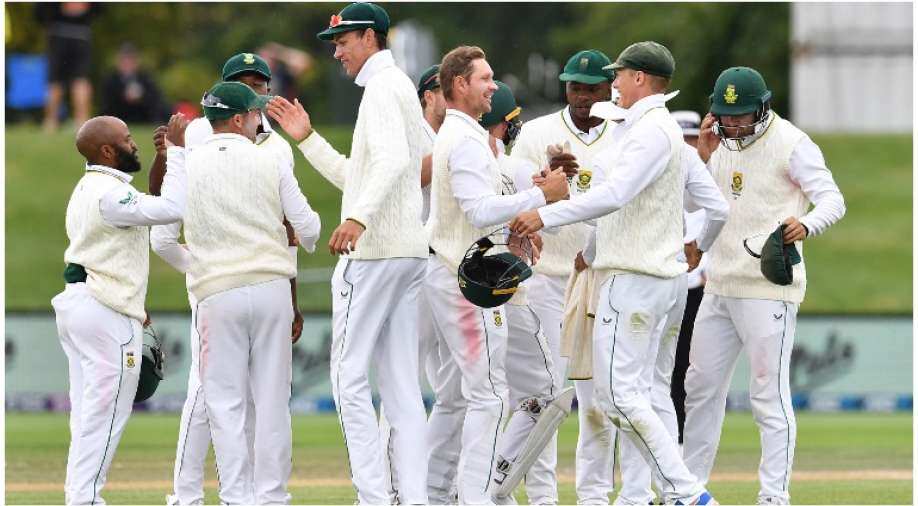 Chasing a would-be world record victory target of 426 runs, New Zealand resumed on 94 for four in the morning and there was a flicker of hope they might save the match as wicketkeeper Tom Blundell and all-rounder Colin de Grandhomme reached lunch at 180 for five.

South Africa turned the tables on New Zealand with a 198-run victory in the second test in Christchurch on Tuesday, crushing the hosts` hopes of a breakthrough series win over the Proteas. Having suffered their second-worst test defeat in the first meeting in Christchurch, South Africa rebounded superbly at Hagley Oval, dismissing the Black Caps for 227 in their second innings just after tea on day five. Chasing a would-be world record victory target of 426 runs, New Zealand resumed on 94 for four in the morning and there was a flicker of hope they might save the match as wicketkeeper Tom Blundell and all-rounder Colin de Grandhomme reached lunch at 180 for five.

However, the home side`s resistance faded quickly after the break when both players tossed away their wickets by pulling paceman Marco Jansen to fielders. Jansen and pace spearhead Kagiso Rabada worked through the tail with the second new ball, before an untimely rain break brought an early tea with South Africa needing one wicket for victory.

Spinner Keshav Maharaj sealed the win by trapping Matt Henry lbw for a duck. Man of the Match Rabada said it was important his team stepped up after being thrashed in the opener. "It`s never easy playing against New Zealand and we knew what we had to do and I`m glad that we could get the job done," he added.

"In the first test we completely didn`t rock up ... We knew we had to win this one, at least to make it 1-1."
New Zealand seamer Henry, named Player of the Series, said the hosts were disappointed not to pick up their first test series win over the Proteas. "Obviously we had a lot hopes coming into this game but you just have to take my hat off to South Africa," said Henry.

"I thought they came back very strong and thoroughly deserved the second test.  It was in the balance a lot, I think ... It really just kept swinging back into their favour. We kept fighting but it just wasn`t quite there in the end."

Lutho Sipamla earlier denied New Zealand number three Devon Conway his fourth test century, breaking a stubborn fifth-wicket partnership of 85 runs with Blundell. The Proteas` third seamer trapped Conway lbw for 92 and New Zealand lost a DRS referral when the batsman tried to overturn the decision.
Blundell had batted with poise and patience until he swung a half-hearted pull shot to give Temba Bavuma a simple catch at short midwicket.

De Grandhomme, who scored a century in the first innings, was out pulling straight to Wiaan Mulder at leg gully in Jansen`s next over. Jansen grabbed a third wicket when tail ender Kyle Jamieson was out for 12 slogging to Rabada in the deep.

Rabada returned to the attack, having Tim Southee top-edge to Sipamla at midwicket to be out for 17, leaving Maharaj to claim the final wicket for victory.