Champions League: Valencia roar back in second half to thrash Lille 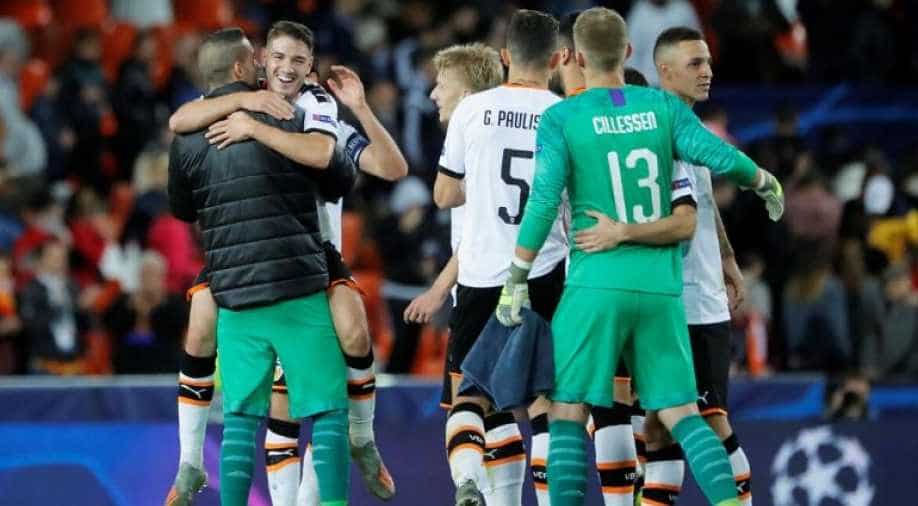 The home side went ahead in the 82nd with an own goal from Lille defender Adama Soumaoro, who diverted Jose Gaya's low cross into the net.

Valencia breathed life into their hopes of qualifying for the last 16 of the Champions League with a stunning second-half turnaround to beat Lille 4-1 at home on Tuesday.

Nigerian forward Victor Osimhen gave the French side a deserved lead in the 25th minute, but Valencia drew level in the 65th minute with an ice-cool 'Panenka' penalty from captain Dani Parejo.

The home side went ahead in the 82nd with an own goal from Lille defender Adama Soumaoro, who diverted Jose Gaya's low cross into the net.

French midfielder Geoffrey Kondogbia stretched Valencia's lead two minutes later with an outstanding long-distance strike, and substitute Ferran Torres rounded off the win with a coolly-taken finish in the 90th.

The victory puts the Spaniards third in Group H on seven points, level on points with leaders Ajax Amsterdam and second-placed Chelsea who played out a thrilling 4-4 draw. Lille are bottom with one.

"This was a crucial game for our chances to qualify and we needed to win it, we worked hard and played with purpose," said goalscorer Kondogbia.

"We reacted well after conceding and in the end, we were much better than them which is why we scored four goals."

Valencia have had inconsistent results after sacking coach Marcelino in September and badly needed a win after conceding a stoppage-time equaliser to draw 1-1 away to Lille two weeks ago.

They produced a sluggish display in the first half, though, and fell behind when Osimhen fired past Jasper Cillessen after an attempted clearance from the home side took a ricochet and bounced into his path.

Rodrigo could have levelled on the stroke of halftime but was thwarted by a fine save from Mike Maignan and they were fortunate not to concede again when the lively Osimhen teed up Turkish forward Yusuf Yazici but he shot straight at Cillessen.

Lille would pay dearly for their wastefulness as defender Jose Fonte was penalised for handling the ball when he tried to block a cross and Parejo showed nerves of steel by calmly chipping the ball down the middle of the net.

The goal roused the Mestalla faithful and the players fed off their energy, producing a relentless finish to kill off their opponents.