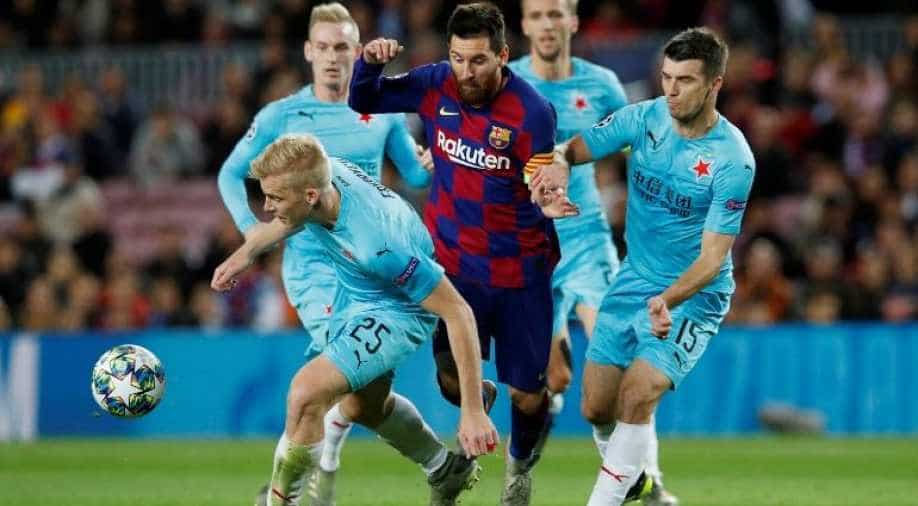 With Luis Suarez injured, Barca lacked a cutting edge and visiting goalkeeper Ondrej Kolar produced an admirable display to shut out the Catalans.

Barcelona were booed off the pitch by their supporters as their patchy form continued with a 0-0 draw at home to Slavia Prague in their Champions League Group F game on Tuesday.

Ernesto Valverde's side had fallen to a 3-1 defeat at Levante in La Liga on the weekend and could not give the rousing response they craved, failing to break down a diligent and bold Slavia side.

With Luis Suarez injured, Barca lacked a cutting edge and visiting goalkeeper Ondrej Kolar produced an admirable display to shut out the Catalans, thwarting Lionel Messi and Sergi Roberto from close range in the second half.

Messi also struck the top of the post in the first period following a thrilling solo charge from his own half and then teed up Arturo Vidal for a tap-in late in the game but the effort was ruled out for offside against the Argentine.

"Playing like this it's difficult to see us winning the Champions League," said Barca defender Gerard Pique.

"We had chances to score but the ball wouldn't go in. Results aren't going our way in these last two games, and when you go two games without winning at Barca the fans expect more because expectations are so high."

Barca lead the group on eight points after four games, while Slavia are bottom with two.

The Czechs, who were unfortunate to lose 2-1 at home to Barcelona two weeks ago, made a bright start and nearly took an early lead with a heavily-deflected shot which was repelled by the Catalans' goalkeeper Marc-Andre ter Stegen.

They did manage to find the net at the end of the first half but the goal was disallowed for a clear offside.

The visitors had bright spells in the second half although they did not manage to test Ter Stegen further, and angry boos and whistles rang out around the Camp Nou at fulltime.

"It's a difficult moment for us but the fans have the right to express how they feel and it's up to us to deal with it," said Barca defender Clement Lenglet.

"We knew Slavia were a dangerous opponent who had quality and we were not taken by surprise by them. We suffered at various stages of the game.

"We don't have any time to sit around and get worried, we have to keep working and play every three days. We're going to turn this around."

There was more bad news for Barca after the game, with the club revealing first-choice left back Jordi Alba had injured his hamstring.

The club's statement did not say how long the Spaniard would be out for but Spanish media reports said he could be missing for three weeks.