UP elections: Congress workers divided over alliance with Samajwadi Party 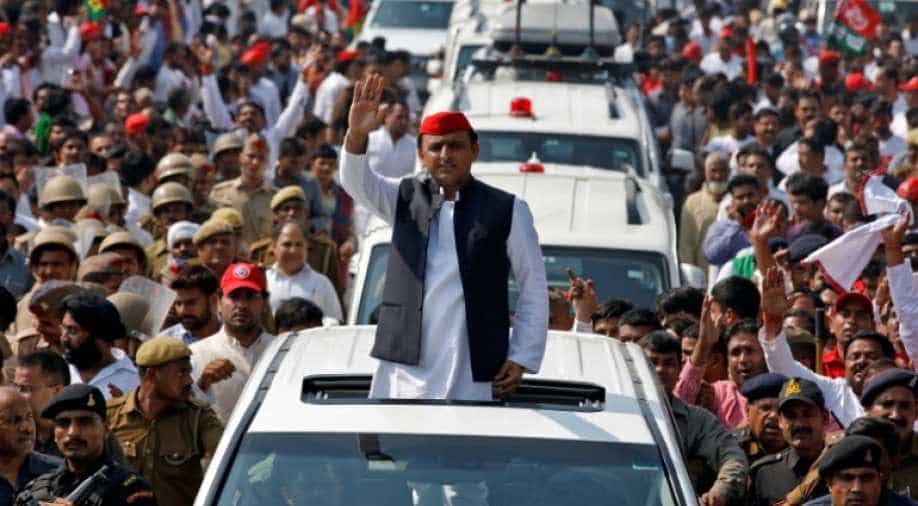 Chief minister of the northern state of Uttar Pradesh and the son of Samajwadi Party (SP) chief Mulayam Singh Yadav, waves at his supporters during an election campaign in Lucknow, India. Photograph:( Reuters )

Both gloom and jubilation descended on Congress headquarters in the Indian capital of New Delhi on Tuesday after general secretary Ghulam Nabi Azad officially confirmed the party's alliance with the Samajwadi Party to contest the assembly elections "under the leadership of chief minister Akhilesh Yadav."

A formal final seat-sharing decision will be announced within 24 to 36 hours.

Ticket aspirants camping at the party office for over a week felt disheartened. Minutes after Azad left, pandemonium ensued on the office lawns, with workers raising slogans against the party leadership and the alliance. Rampal Singh Yadav, who was supposed to contest from Mashira in Etah district, said he was bitterly disappointed.

"Even if they had to forge an alliance, they should have done so a year ago," he told DNA. A year ago, Congress vice-president Rahul Gandhi had invited us to campaign against the SP. "He also coined the slogan 27 saal, UP behaal (27 years, UP in ruins) for us to go around and apprise people about the misrule and lawlessness of the Akhilesh government. With what face will I now go to people asking them to vote for the SP?" he asked.

Ishwar Chandra from Basti in Eastern UP also had similar woes. He said just a few months ago he along with other workers toiled to make Rahul Gandhi's 2500-km kisan yatra (farmer's rally) a grand success.

But there were others who were euphoric at the announcement. Etrat Hussain Babar from Sambal said he did not rue losing out to the SP candidate. "We will fight together to form an alliance. At least we have a chance to be in power now after 27 years. It isn't possible for us to win the elections alone," he said. Chaudhry Shamim Ahmed from Amroha said a tie-up in UP, like Bihar, will keep the BJP out, and will give party workers a chance to share power.

Hints of an alliance also came from former Delhi Chief Minister Sheila Dikshit projected by the Congress as its chief ministerial candidate in the Uttar Pradesh elections. "I would like to gracefully withdraw as we cannot have two CM candidates for the UP state polls," she said, indicating that the party has already decided to project Akhilesh as the joint CM candidate of the new alliance.

"We are forging an alliance to form the government," Azad said while skirting a question on the grand alliance, by roping in smaller parties. He said so far the Congress and SP were engaged in deciding the nitty-gritty of seat- sharing.

Congress sources however said, both sides have already decided who will contest which seats amid the possibility of both fielding candidates in some constituencies for "friendly fights". Congress is aiming at 100 seats in the 403-member assembly against its 20 MLAs in the present House.

Azad also inducted BSP's Sahibabad MLA Amarpal Sharma in the Congress, just a day after he was expelled by BSP Supremo Mayawati on Monday. Accusing Mayawati of sacking him just because he refused to fulfil her demand of Rs 5 crore to give him the ticket again, he said he was contemplating contesting as an independent but felt happy to be welcomed in the Congress. He had won the last assembly election from Sahibabad in Ghaziabad district with a record margin of 1.26 lakh votes.