UP election: Congress close to finalising seat-sharing arrangement with Akhilesh 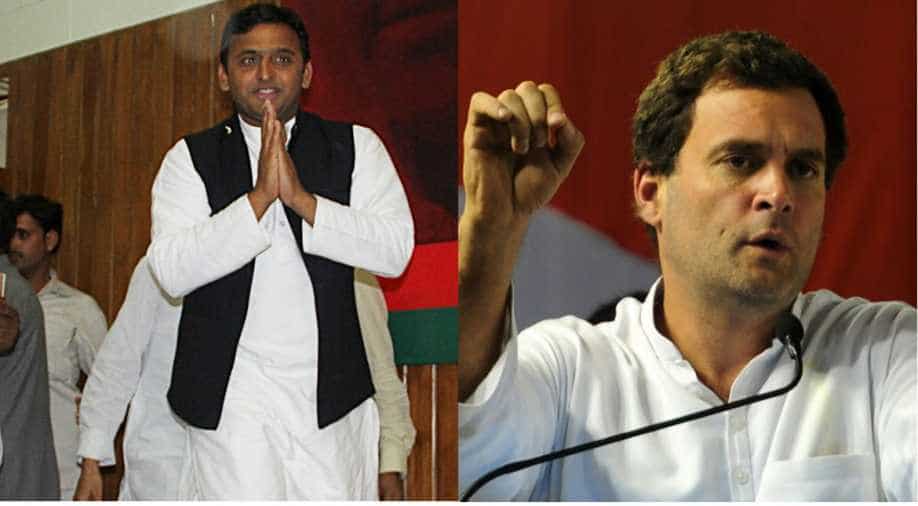 The idea is to project the UP arrangement as a 'Grand Alliance' like the one formed ahead of the Bihar Assembly elections to defeat the BJP. Photograph:( AFP )

The Congress has almost finalised the seat-sharing arrangement for the Assembly elections with the Samajwadi Party (SP) faction led by Uttar Pradesh Chief Minister Akhilesh Yadav but it is subject to the Election Commission's verdict on the disputed bicycle symbol.

Congress insiders said that in case the warring SP factions decide to unite, as indicated by the 77-year old patriarch Mulayam Singh Yadav, the possibilities of the alliance would look remote.

On Friday, Mulayam Singh appeared yielding to the prospect of letting the faction led by his son to use the party's symbol. He told his supporters that he doesn't want to further damage the SP's chances in the polls because of its internal feud.

A hectic backroom activity had reached a feverish pitch in Delhi over the past few days, with the Congress general secretary Ghulam Nabi Azad conducting meetings with Ramgopal Yadav, who is anchoring Akhilesh's faction, at a secret place to fine-tune the distribution of seats. The Congress is negotiating for some 150 seats, leaving 253 for Akhilesh's party.

Congress leaders said that they expect Ram Gopal Yadav to finally give them 110 to 120 seats and also seek an assurance that other alliance partners, such as the Rashtriya Lok Dal of Ajit Singh, Peace Party, breakaway Apana Dal of Krishna Patel, Janata Dal (U), Trinamool Congress and Nationalist Congress Party would get seats from the Congress quota.

Earlier, Congress Vice President Rahul Gandhi as well as Azad had ruled out any alliance with the SP. Azad broke this news to Uttar Pradesh Congress leaders a few days back, asking them to quickly identify the seats to be sought in the bargain.

Congress is seeking to field candidates for 80 to 90 seats, leaving the rest for other alliance partners out of its quota of 110-120. State Congress leaders at a closed-door meeting with Gandhi had clearly told him last month that the party would not cut much ice on its own and a four-cornered fight would benefit the BJP.

Sources said it was after Priyanka came into the picture that he gave a green signal for the alliance. Earlier, the Congress was of the opinion that it should take advantage of the infighting in the SP and project itself as an alternative.

The idea is to project the UP arrangement as a 'Grand Alliance' like the one formed ahead of the Bihar Assembly elections to defeat the BJP.

It is believed that Congress President Sonia Gandhi's daughter Priyanka Gandhi Vadra has been working with Akhilesh's wife Dimple, who is also an MP, to stitch the alliance.

Both of them are understood to have met a few days ago. But the SP sources said that Dimple had called on Priyanka to greet on her 45th birthday on Thursday. The deal may be announced as early as Tuesday after the EC passes its order on Monday.

Congress leaders apprehend that in case the two SP factions decide to come together again, there will be hardly any seats left for the alliance.

In case both the parties join hands, Priyanka and Dimple will be campaigning together. While Priyanka will be projected as the scion of the Gandhi family, Dimple will be branded as 'an ideal wife and bahu (daughter-in-law)'.

Mike Pompeo warns Iran not to be 'spoiler' in Afghanistan