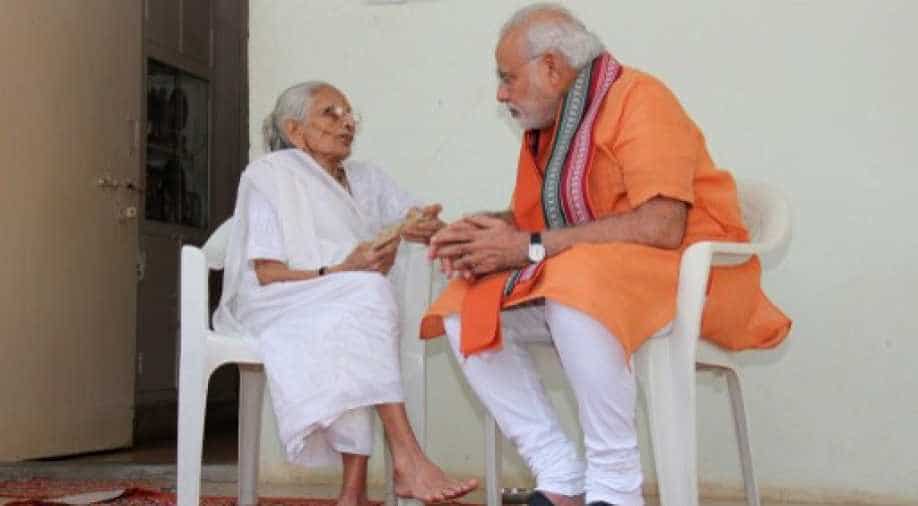 A file photo of Indian Prime Minister Narendra Modi with his mother in Gujarat. Photograph:( AFP )

Indian Prime Minister Narendra Modi's 97-year-old mother Hiraba today visited a bank at her village in Gandhinagar, just like other citizens, and exchanged her old notes in view of the demonetisation of the high-value currency notes.

Accompanied by relatives, Hiraba, who was in a wheelchair, came to a branch of Oriental Bank of Commerce at Raisan village this morning and got notes worth Rs 4,500 exchanged.

She came to the bank with Rs 500 notes, got the mandatory form filled, put her thumb impression on the form and exchanged her money.

After receiving a new note of Rs 2,000, she also displayed it in front of the mediapersons, who virtually mobbed her as they sought her reaction.

Hiraba lives with Prime Minister Modi's younger brother Pankaj Modi in Raisan on the outskirts of Gandhinagar.
The prime minister had visited his mother on September 17 this year to take her blessings on his 66th birthday.

Hiraba is known to lead a very simple life and travels in public transport. Last time when she visited Gandhinagar civil hospital for a regular check-up, she was seen going in an autorickshaw.

Modi had on November 8 announced scrapping of Rs 500 and Rs 1,000 notes to curb black money menace.

After the announcement, people have been queueing up at banks across the country to get their old high denomination notes exchanged for the new notes.