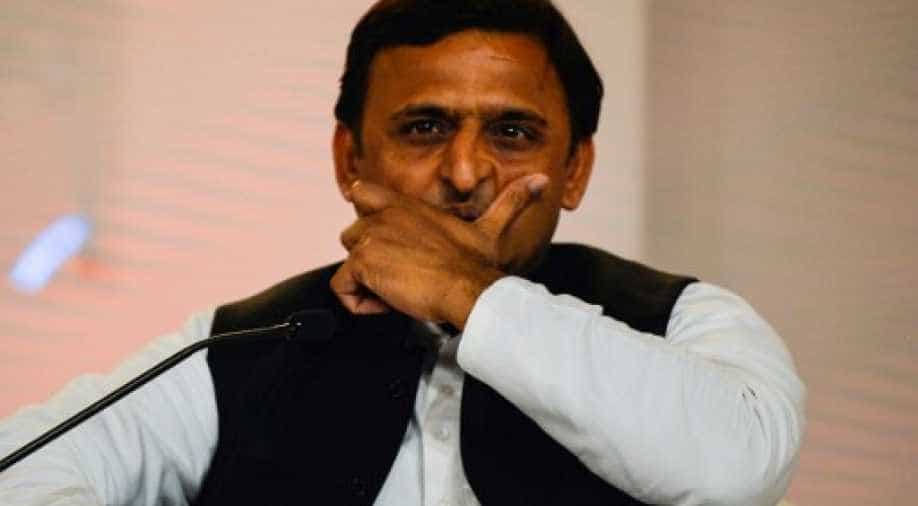 While all eyes in India are on the Election Commission's (EC) verdict as to which faction of the Samajwadi Party (SP) it will recognise and allot the 'cycle' symbol, Uttar Pradesh Chief Minister Akhilesh Yadav has once again seized the initiative from his father Mulayam Singh Yadav.

Armed with a resolution passed at the party's national convention on January 1, he has asked 13 banks to stop withdrawal of money, till he authorises a new custodian of party funds. This measure completes the isolation of his father, and uncle Shivpal Yadav, in the ongoing battle for political supremacy.

In 10 scheduled and three non-scheduled banks, the party has parked Rs 583 crore as per its financial statements on March 31, 2016. Sources said that the banks have immediately seized these accounts, making it impossible for Shivpal to withdraw money. So far, Shivpal used to be the authorised signatory to release funds on behalf of the party.

With the poll campaign expected to take a feverish pitch from next week, the decision to choke the funds of the Mulayam and Shivpal factions will have a major bearing on their decision to continue to remain at loggerheads with the chief minister. "Whoever controls the funds will have an upper hand," said a party leader.

The banks were sent a letter signed by 'acting national president' Akhilesh Yadav. The party has parked money in four accounts of State Bank of India, three accounts of Bank of Baroda, two Vijaya Bank and one Canara Bank accounts. Three other accounts are with the UP State Cooperative Bank.

Party insiders are optimistic that the move would intensify the rapprochement between the two factions. Senior party leader Ramgopal Yadav, who was in New Delhi on Friday, deferred for a day to visit the EC to hand over affidavits in support of Akhilesh. The EC has asked both groups to file their claims by Monday.

Talking to reporters, Ramgopal Yadav ruled out that feelers were received from the Mulayam camp to rescind from the decision taken at the party convention. He said that Mulayam was being misled by some vested interests and added that he hoped he would come out of this coterie once he realised that 90 per cent party workers were behind Akhilesh.

Ramgopal said that there was no question of Akhilesh stepping down as national president. He claimed that 212 out of 229 SP MLAs, 56 out of 68 MLCs, and 15 out of 24 MPs, as also some 5,000 delegates have handed over affidavits expressing full confidence in Akhilesh as the party president. Ramgopal said he has now sought time from the EC on Saturday to submit all affidavits in seven copies as demanded by it.

Mulayam, who had earlier flown to Delhi to stake claim to the party symbol, with documents, quietly returned to Lucknow. Shivpal said that they were not in a hurry as they had time till Monday. In Lucknow, the SP supremo had also cancelled a press conference he called on Friday to clear the air as the two sides could not reach any compromise. He even sent Shivpal to the residence of Akhilesh to talk to him.

In fact, leaders of both sides were closeted at the Lucknow residence of state minister Mohd. Azam Khan, who has been trying to play peacemaker for the last few days.

Akhilesh, on Friday, also seized control of the district units of the party with the appointment of party heads in seven more districts, a day after announcing new chiefs for four districts. The existing district presidents in Mainpuri, Moradabad, Fatehpur, Etawah, Farukhabad, Firozabad and Hardoi districts were sacked with immediate effect to pave the way for new faces.

Party insiders said the family, who, till now, were rooting for Mulayam are now backing Akhilesh. Most are Abhay Ram Yadav and Rajpal Yadav – both uncles of his. As a result, Mulayam Singh is left only with a handful of die-hard loyalists like Shivpal, Rajya Sabha MP Amar Singh and actor-turned-politician Jaya Prada.