'Why do teachers in J&K use separate map for state?' asks Army Chief 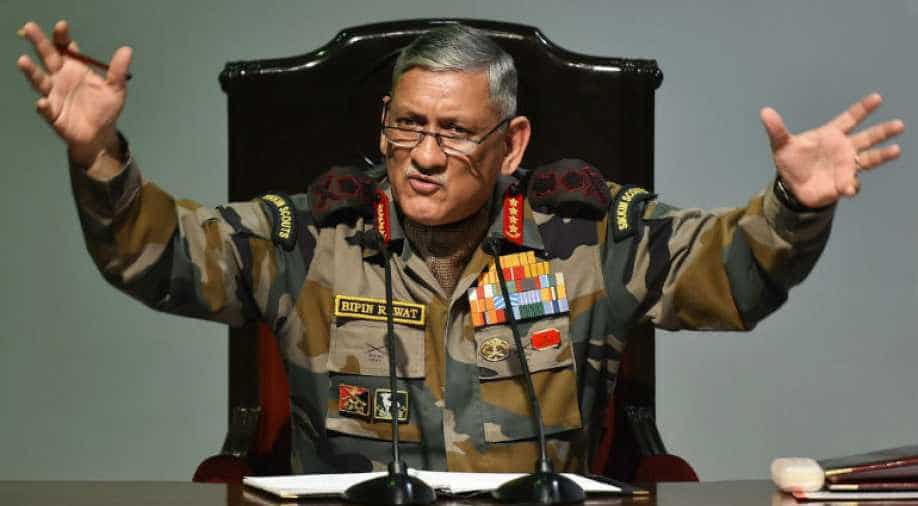 Army Chief General Bipin Rawat on Friday said that schools in Jammu and Kashmir are instilling wrong information into students' mind by showing them a separate map of their state and not as one Indian map.

"In the schools in Jammu and Kashmir, what teachers are teaching should not be taught. In schools, there can be seen two maps - one of India another of Jammu and Kashmir. Why do we need a separate map for the state? What does it teach the children?" Rawat said addressing the media ahead of the Army Day on January 15.

On combating terrorism in Jammu and Kashmir, General Rawat asserted, "We may have neutralised several terrorists but we have also caught 39 of them alive because we wanted to give them a second chance."

He also called for changing India's focus from the western frontier to the northern one in the wake of growing Chinese presence in India's neighbourhood like Maldives, Nepal, Sri Lanka and Myanmar, which have traditionally close ties with New Delhi.

General Rawat said countries like Nepal, Bhutan, Myanmar, Bangladesh, Sri Lanka and Afghanistan have to be kept on board as part of a broader strategy to deal with China.

"I think we cannot allow the neighbourhood to be drifted away from us - whether it is Nepal, Bhutan, Myanmar, Bangladesh, Sri Lanka or Afghanistan. These nations have to be kept on board, and I think we have to put in our wholehearted effort to ensure we continue to support them," he said.

"We are seeking support of other nations, group of nations in the region, to see that we are not isolated completely in a situation in Asia against an assertive China. That is the next step that is being taken and therefore you will find that a quadrilateral is formed," General Rawat said.

In November last year, India, Japan, Australia and the US had set the ball rolling for forming a quadrilateral coalition in the Indo-Pacific region to pursue their common interests, a move seen as a measure to counter growing Chinese influence.

He said there are other countries that are coming on board to support India in whatever way they can.

"At the military level, we know that if there is a threat from China, we have to be prepared for it," he said.

He said by keeping these nations with it, India would be able to make sure that the assertiveness that China is showing against it is balenced in some way.

"That is the approach we are taking. We know China is a powerful country but let us also not forget that we are not a weak nation. Let's not get so worried. We are dealing with the situation. We are confident we will be able to handle the situation," he said.

Troops of India and China were locked in a 73-day-long standoff in Doklam starting in June last year after the Indian side stopped construction of a road in the disputed area by the Chinese Army. Bhutan and China have a dispute over Doklam. The face-off ended on August 28.

General Rawat said China has been keeping its troops in north Doklam.

He said India is dealing with China at different levels including through diplomatic engagement.