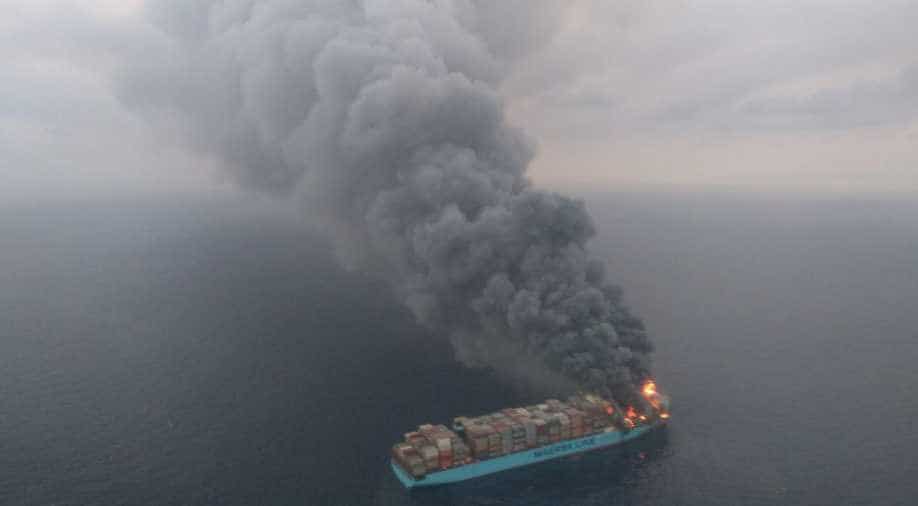 Twenty-three crew members were rescued but one of them, a Thai national, died on Wednesday, added Maersk. Photograph:( Zee News Network )

A crew member died and four others went missing after fire broke out on a new Maersk Line container vessel in the Arabian Sea, the company said.

The vessel caught fire at around 1520 GMT on Tuesday, about 900 nautical miles southeast of Salalah, Oman, the world's biggest container shipping company said in a statement.

Twenty-three crew members were rescued but one of them, a Thai national, died on Wednesday, added Maersk.

"His health condition drastically deteriorated ... due to the injuries sustained in connection to the fire," said Maersk, a unit of Danish shipping firm A.P. Moller-Maersk.

The fire was still burning on Wednesday and searches were still going on for four other crew members who went missing after the blaze, it added.

"This is a very serious fire," a company spokeswoman said. "At this stage we have no reason to believe the fire was caused by an error in the ship's construction."

The 27-strong crew included 13 from India, nine from the Philippines, two Thai nationals and one each from Romania, South Africa and the United Kingdom.

Maersk did not disclose the identity of the four missing crew members but said relatives had been informed.

Maersk said the crew of Maersk Honam sent out a distress signal after unsuccessful firefighting efforts on Tuesday.