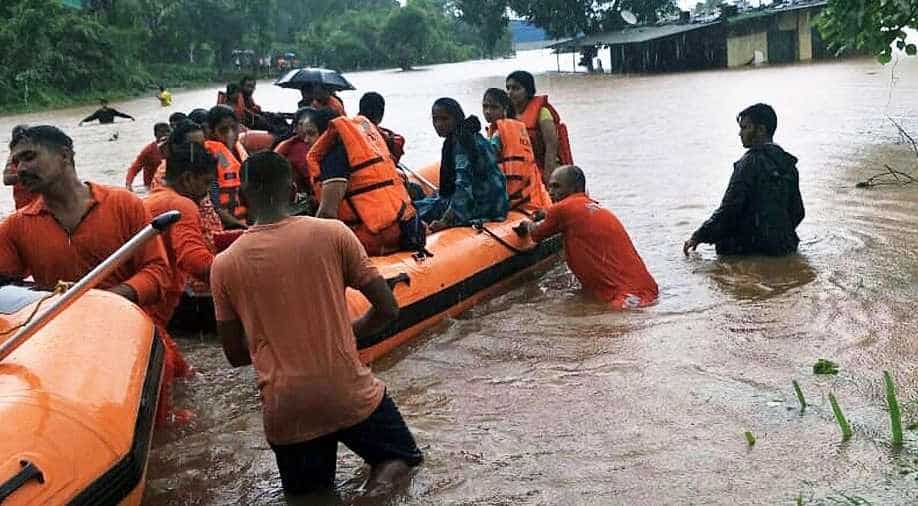 Some rescue teams also include specialist Naval Divers and diving equipment. Several hundreds of people more have been rescued from Chikhli to safer areas at Sontali and Kolhapur.

With large parts of Maharashtra and Karnataka reeling under extensive flooding due to incessant rains, the Western Naval Command of the Indian Navy has mobilised considerable resources to provide assistance to state and district administrations of affected areas.

"Despite adverse weather conditions and widespread inundation in affected areas, a total of 14 rescue teams of the Western Naval Command, including five teams from Goa Naval Area, have been operating in Kolhapur, Belgaum and Uttar Kannada districts of Maharashtra and Karnataka respectively since August 5," read a press release of Indian Navy dated August 8.

Karnataka: 9 people have died in the flood-affected state, till date. 16875 people and 3010 animals have been shifted to 272 relief camps opened in the state.

"The teams have been deployed using Indian Navy Dornier aircraft and ALH helicopters as well as the Indian Air Force MI-17 helicopters from Goa, Mumbai and Pune. Some teams had even proceeded by road when flying operations could not be undertaken. The naval rescue teams are equipped with Gemini rubber boats, loud hailers, first aid kits, life jackets and lifebuoys," the release read.

Some rescue teams also include specialist Naval Divers and diving equipment. Several hundreds of people more have been rescued from Chikhli to safer areas at Sontali and Kolhapur.

"In Karnataka, the rescue team proceeded to Hinduwada in Malapur area and evacuated many more people giving priority to women, children and critically ill patients to safer areas. Another team was deployed to Kovadu village in Belgaum district. A total of 869 people have been moved to safety in Karnataka," the release said.