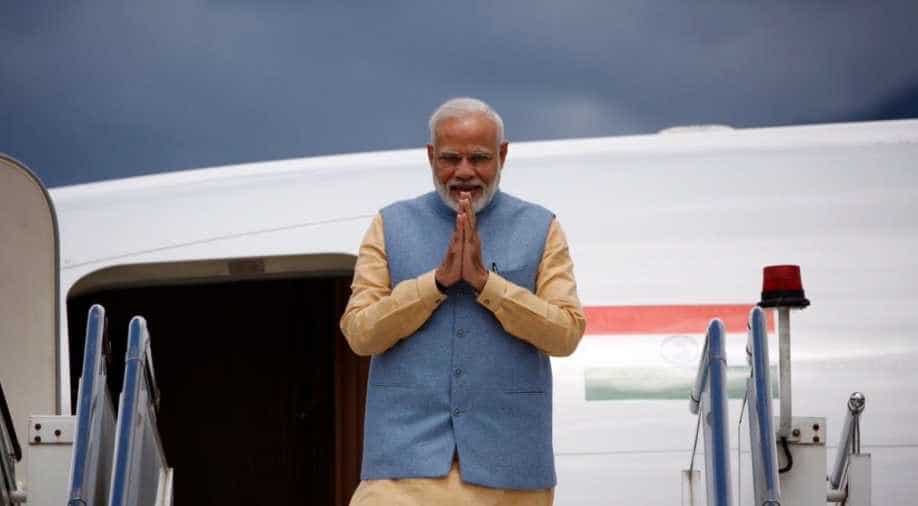 PM Modi left for Houston from the national capital late on Friday. The first day of his engagement will see a round table meeting with the CEOs of oil sector companies.

Prime Minister Narendra Modi will be in the United States for a week-long visit which will see him meet with US President Donald Trump, hold a number of multilateral and bilateral engagements, take part in his biggest ever address in the United States and address the UNGA in New York on September 27.

Here's a quick look at the prime minister's jam-packed US schedule.

PM Modi left for Houston from the national capital late on Friday. The first day of his engagement will see a round table meeting with the CEOs of oil sector companies.

The prime minister will deliver his address at the 'Howdy Modi', an Indian community event, which has assumed added importance with US President Donald Trump also attending it. The event at the NRG Stadium will be followed by a luncheon meeting with elected officials and a community reception at the same venue. Modi will leave for New York the same day.

He will also attend the Leaders' Dialogue on Strategic Responses to Terrorist and Violent Extremist Narratives. Modi will also meet the Presidents of Namibia and Maldives.

The PM will meet US President Donald Trump at the UN headquarters, which will be their second meeting in three days. His other engagements during the day include India-Pacific islands' leaders' meeting and Gandhi @150 event. Later, he will receive the Bill and Melinda Gates Foundation's Goalkeepers Global Goals Award 2019.

Modi will deliver a keynote address at the Bloomberg Global Business Forum. He will then attend a CEOs' routable and also have one-on-one meetings. He will also be meeting Prime Ministers of Belgium, Armenia and New Zealand and President of Estonia.

PM Modi has a scheduled meeting with Iran President Hassan Rouhani. He will also be meeting the president of Cyprus and Prime Minister of Greece.

The prime minister will address the United Nations General Assembly (UNGA). This will be followed by an informal meeting with other delegations and Indian community outside the general assembly hall. Meetings with prime ministers of Bhutan and Bangladesh is also scheduled on the same day. The Prime Minister will leave for New Delhi on September 28.

On Friday, right before his departure for the United States, PM Modi in a statement said that he will aim to present India as a global leader and boost ties with the US.

"I am confident that my visit would present India as a vibrant land of opportunities, a reliable partner and a global leader and will also help impart new energy to our relations with the US," the prime minister tweeted out.