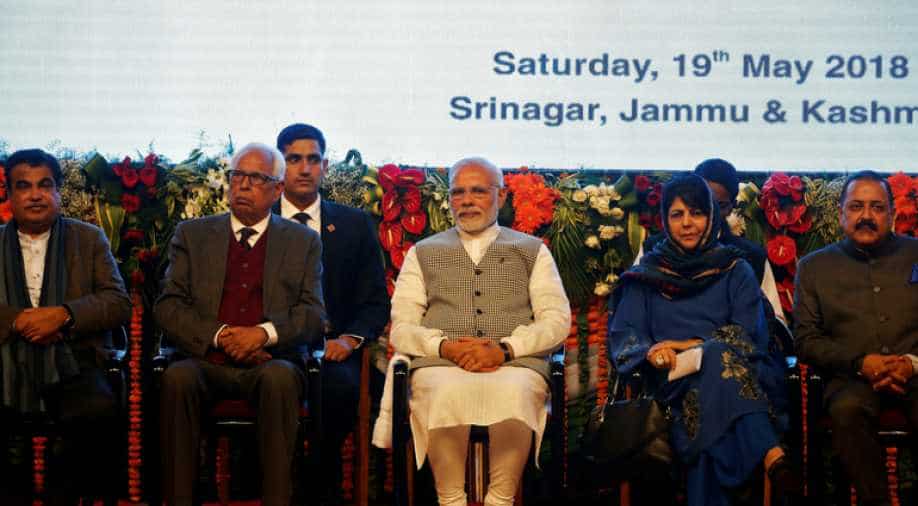 Prime Minister Narendra Modi on Saturday appealed to those Kashmiri youth who have joined violence to return to their homes and live a life of dignity and peace.

The Prime Minister, who is on his first visit to the state after announcing the suspension of anti-militancy operations during holy month of Ramzan, said there are foreign powers at play in the state which do not want development of Jammu and Kashmir.

"Every stone, every weapon, raised by misguided youths destabilises their own Jammu and Kashmir. The state will have to come out of this atmosphere of instability," he said.

Modi said the youths need to join the mainstream development of India and of Kashmir for their future and that of coming generation.

He said the central and the state government have policy, intent and capability to take decisions to solve development issues of the state.

The prime minister dedicated to the nation the 330-MW Kishenganga Power Project constructed in the Gurez area of Kashmir.

The Ring Road in Srinagar is aimed at reducing traffic congestion in these cities and making road travel safer, faster, more convenient and more environment-friendly.

"Not a single year has passed since I took over as the prime minister when I did not visit the state," he said.

The Prime Minister said this month is to remember Prophet Mohammad's teaching and message.

"The lessons of equality and brotherhood from his life can take country and the world forward in true sense," he said.

The Prime Minister said it was a happy coincidence that the ceremony for handing over the project is taking place in the month of Ramzan.

"The project will not only provide free but also sufficient power to the state. A large portion of power requirements of the state are supplied from other parts of the country. This 330 MW project will solve the shortage of power issue to a considerable extent," he said.

The Prime Minister said the government is trying to provide power to every house in the state under the Saubhagya scheme.

He said an important part of Jammu and Kashmir's development is tourism but it cannot run on old methods.

"The tourists now want facilities. They do not want to be stuck in narrow lanes for hours. They want continuous power supply, they want hygiene. Better air connectivity," he said, adding that the government was working for a modern ecosystem that is required for the development of tourism.

"There will be an increase in tourists in J and K with stronger ecosystem. The youths of the state will get new employment opportunity with it," he said.