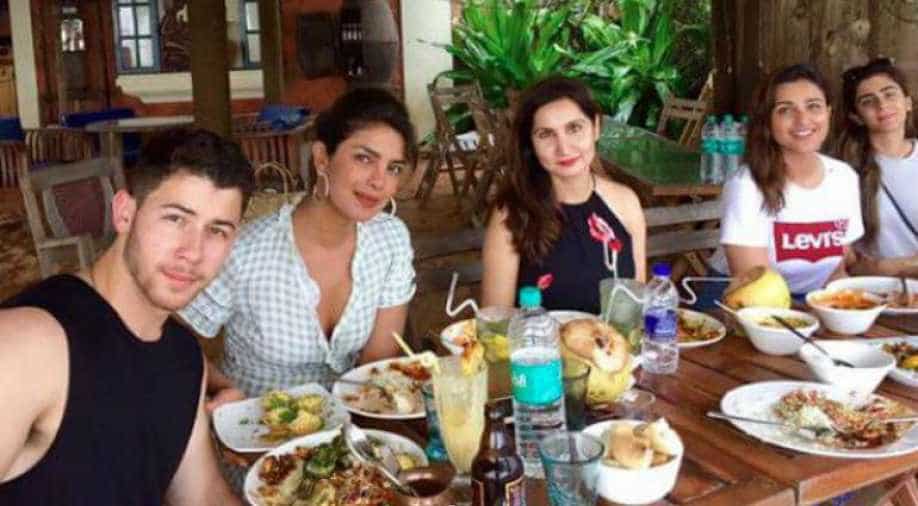 The Chopra sister lived it up in the pristine beaches of Goa over the weekend. Rains did not deter their spirits as Priyanka and Parineeti Chopra were seen dancing in the rain.

Parineeti Chopra posted a video of Priyanka and herself dancing to the famous rain song 'Tip Tip Barsa Pani' on Monday. The sisters along with other family members are in Goa for a vacation. Priyanka's rumoured beau Nick Jonas has also accompanied the family.

In fact, social media was abuzz with photos of Priyanka, Nick and Parineeti enjoying a hearty Goan meal. Some lucky fans also got to click a few photos with the couple that made to the internet as well.

On Sunday the Chopra sisters along with Nick and Priyanka's brother Siddharth were spotted at Mumbai's Kalina airport leaving for Goa.

While Priyanka and Nick are still in Goa, Parineeti returned to Mumbai on Monday night.

Priyanka, who wrapped up work on her series 'Quantico' will soon start shooting for 'Bharat' opposite Salman Khan. Parineeti's next 'Namastey England' with Arjun Kapoor is scheduled to release in a few months.

Meanwhile, Priyanka's mother, Madhu Chopra said it was 'too early' to comment on her daughter's relationship with Nick. "We just went out for dinner where Nick was present. But it was a large group. There were 10-odd people, so I didn’t get the time to know him that well," said Madhu to DNA. When she was  prodded about what she thought of Nick, she said, “I’ve met him for the first time, so it’s too early to form an opinion.”