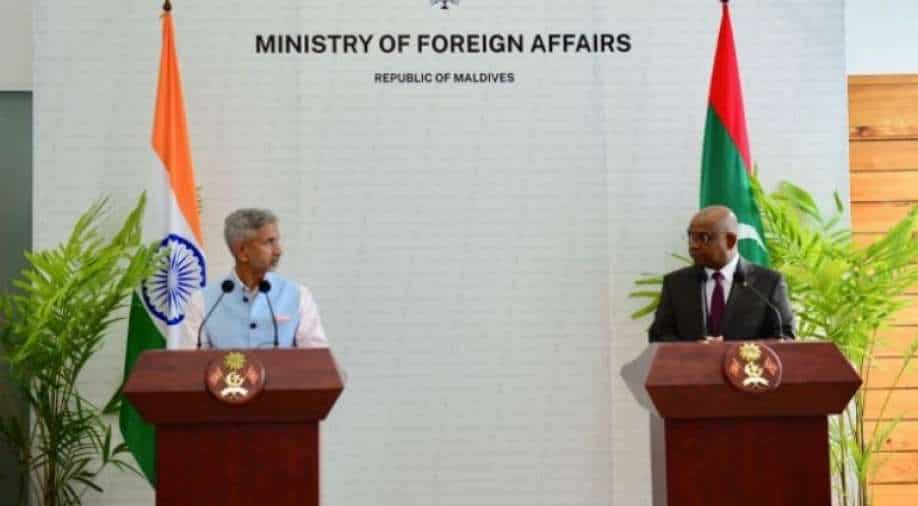 Amid the pandemic, India sent medicines and a rapid response team to the country to deal with the crisis

The first day of External Affairs Minister Dr. S Jaishankar's two-day Maldives visit saw handing over of additional 100,000 doses of COVID vaccines to the country and offering of standalone Line of Credit of $40 million for sports infrastructure for the country.

Adding, "the special place we have for each other in our foreign policy at one level, and in our hearts at another, make our bilateral relationship truly a moral for our neighbourly relations."

He pointed out that, "the first and largest recipient of India’s Covid support – be it medicines, food, medical response teams or financial package – was Maldives."

Amid the pandemic, India sent medicines and a rapid response team to the country to deal with the crisis. Last month saw, India gifting vaccines to the country within 96 hours of it launching its vaccination program. Maldives along with Bhutan were the first 2 countries to get India's vaccine gift.

EAM reiterated India's "strong support" for the "candidature of Foreign Minster Abdulla Shahid for President of the 76th session of the UN General Assembly next year."

During the current visit, EAM also spoke at the Ekuveni Stadium in the Maldives. In November last year, the Indian Foreign Secretary had done the groundbreaking for the synthetic track at the stadium which was inaugurated by Maldives President last month.

EAM at the stadium announced that New Delhi has offered a standalone Line of Credit (LOC) of $ 40 million for Sports Infrastructure in the Maldives. The new LOC will be signed after the formalities are complete.

Elaborating, "It is noteworthy as was mentioned before that the fastest man in South Asia - Hassan Saaid- is also a proud Maldivian, who has received, we are glad to say training in India."

India is building state of art Cricket Stadium in Hulhumalé along with a cricket-coaching center.

This is the 2nd visit of EAM Jaishankar to the country. His first visit was to attend the 5th Indian Ocean Conference in September 2019. Last year saw, Foreign secretary Harsh Shringla visiting the country, both foreign ministers having a video meeting, and a telephonic conversation between PM Modi and President Solih.

Five pacts were signed between India and Maldives on Saturday, which were:

1. Amendatory Agreement to repurpose an older EXIM Bank of India Line of Credit of USD 25 million for Road Devt

2. Letter of Intent between EXIM Bank and local authorities for financing a housing project of 2000 units in Hulhumale

3. MoU on grant funding USD 0.5 million for a fish processing plant in Kendhikulhudhoo in the northern Maldives

4. MoU on capacity building and exchange of content and expertise between Prasar Bharati and Public State Media, Maldives

5. MoU on sustainable urban development between MoHUA and Ministry of national planning, housing and infrastructure, Maldives