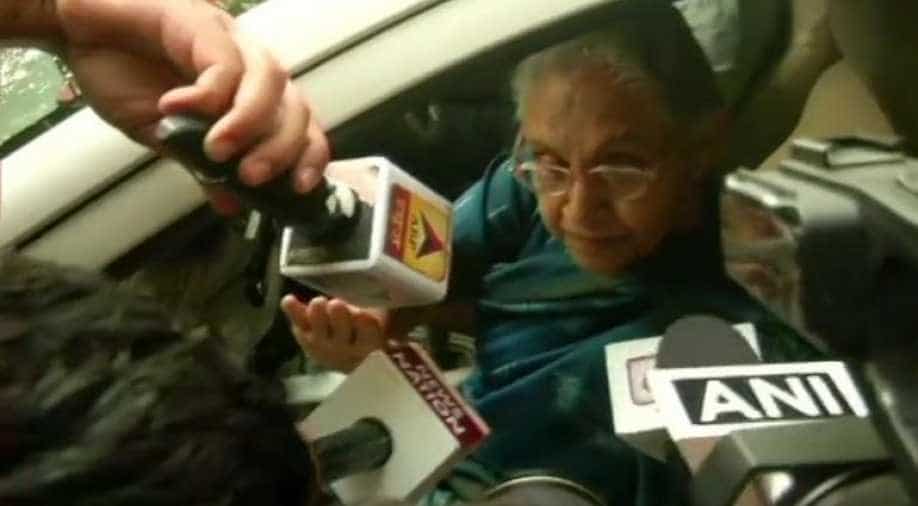 Delhi Congress chief Sheila Dikshit visited Gandhi's Tughlak Lane residence. After coming out, she remained silent on whether she was able to meet the Gandhi scion.

Congress workers gathered outside party chief Rahul Gandhi's residence on Wednesday urging him to withdraw his offer to resign.

Delhi Congress chief Sheila Dikshit visited Gandhi's Tughlak Lane residence. After coming out, she remained silent on whether she was able to meet the Gandhi scion.

Sources said she could not meet Rahul Gandhi.

A close aide of the Delhi Congress chief said Dikshit left a message for the Congress president in which she asked Gandhi to withdraw his offer to resign.

"Gandhi is not meeting any party leaders. So, Dikshit left her message urging Gandhi to reconsider his decision in the interest of the party with K Raju, a confidante of the party chief," the close aide added.

Boxer Vijender Singh, who had fought the Lok Sabha polls from the South Delhi constituency and ended up at the third spot said workers do not want Rahul Gandhi to resign as he is an "able and hardworking" leader.

Watch: Rahul Gandhi obdurate on stepping down as Congress Prez

"He has not resigned. We have come to talk to him. He has made an offer to resign but people do not want him to go. He has worked hard. If the results are not in our favour, it hurts but we are fighters. Nobody else can work like him. He is a leader who takes everyone together," Singh said.

Slogans of 'Rahulji, we are with you' and 'Please do not resign' rang through the air. Several workers were carrying placards with Gandhi's photos urging him not to resign.

Some workers were even demanding that elections be held again in a fair manner with ballot papers instead of EVMs since the latter could have tampered.

Congress leader Jagdish Tytler said there are millions of Congress workers who do not want Gandhi to resign.

The crisis in the Congress showed no signs of easing with Gandhi sticking to his decision to resign as party chief after its Lok Sabha poll debacle and staying away from meeting party leaders.

Rajasthan Chief Minister Ashok Gehlot and his deputy Sachin Pilot went to meet Gandhi at his Tughlaq Lane residence on Tuesday, but they only met Priyanka.

Senior Congress leaders have been pressing Gandhi to take back his decision to resign and revamp the party at all levels in these challenging times.

Violent clash at Galwan valley was ‘planned’ by Chinese government: Top US panel