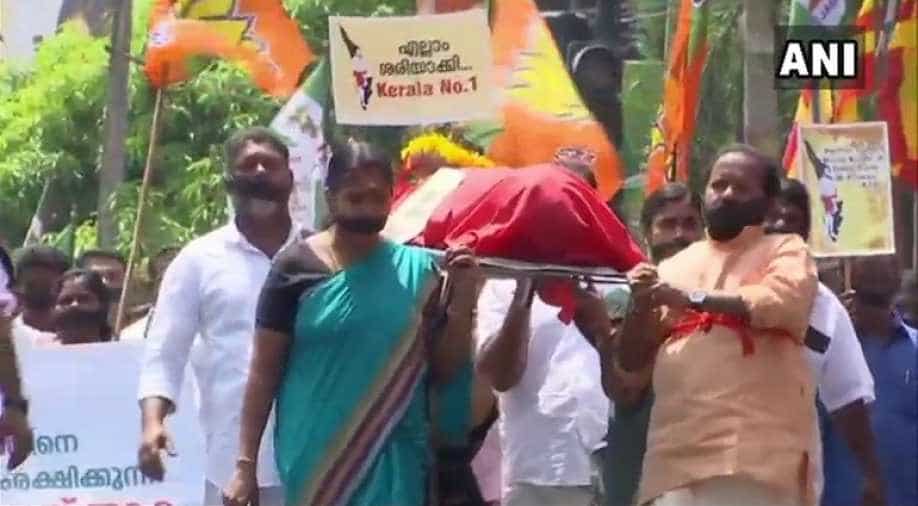 The 27-year-old was beaten to death after being attacked by a group of people in Palakkad's Attappadi on Thursday evening. Photograph:( ANI )

The Bharatiya Janata Party (BJP) workers in Kerala's Thiruvananthapuram on Saturday staged a protest with a symbolic body on shoulders over the death of a tribal youth.

The 27-year-old was beaten to death after being attacked by a group of people in Palakkad's Attappadi on Thursday evening.

BJP workers stage protest in Trivandrum with a symbolic body, over death of a tribal youth, who died after being beaten up in Palakkad's Attappadi. #Kerala pic.twitter.com/ABNB1ITozu

He was attacked with sticks for allegedly stealing valuables and food items from the house of a local person.

After his health started deteriorating, the police took him to a nearby hospital where he was declared brought dead.

The incident came to light after the mob shot videos and clicked selfies of the brutal incident, which went viral on social media on Friday.

Earlier in the day, Congress President Rahul Gandhi took to his Twitter handle and condemned the cruel lynching of the dead tribal youth.

"I am deeply disturbed by the savage and cruel lynching of a tribal in Kerala yesterday, captured on camera," Rahul said.

"We must guard against growing intolerance in our society & speak out in one voice to condemn these acts of mindless violence, " he added.

The Kerala government has announced a relief of Rs 10 lakh to the family of the tribal youth.

An investigation is underway and search is on to nab all the culprits.