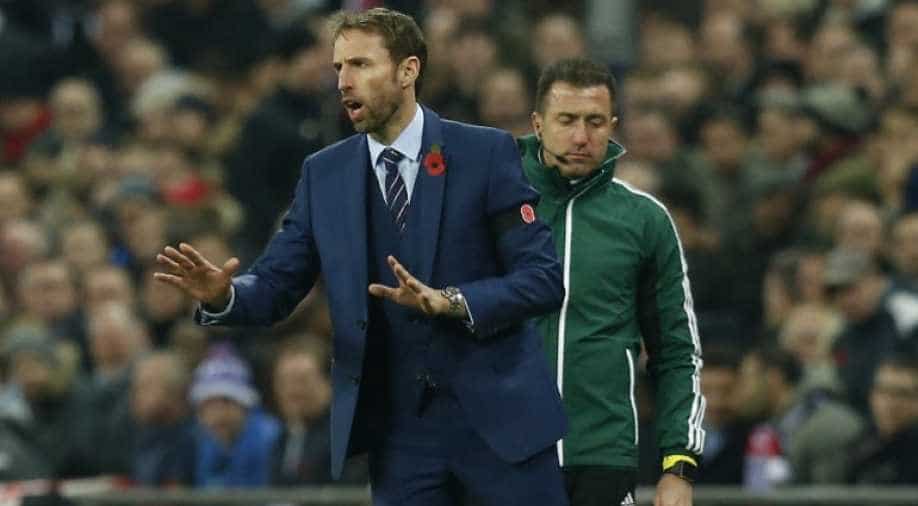 While England are unbeaten on Southgate's watch, they are yet to produce a performance that has got fans off their seats. After a laboured 2-0 win over Malta, they were fortunate not to lose in a 0-0 draw away to Slovenia. Photograph:( AFP )

England's caretaker manager Gareth Southgate faces a man he aspires to emulate in terms of style and status in Tuesday's friendly against Julen Lopetegui's Spain.

The match at Wembley will be the fourth and final assignment of Southgate's interim stint and following Friday's 3-0 win over Scotland in World Cup qualifying he is expected to be handed the role full-time.

Like Southgate, Lopetegui earned the faith of his country's football association by excelling as under-21s coach, while Spain's confident passing game is something Southgate wants England to replicate.

"It's one of the biggest challenges that we can face," Southgate said ahead of the encounter.

"It looks as though they'll have a couple of players missing, but they have strength in depth and a clear identity of how they play through all of their age groups.

"Obviously Julen has been the under-21 manager so he knows how the system is there. He's worked with so many of the players and the style, so it's going to be a huge test for us.

"But that's a good challenge, a different type of challenge for us to prepare for."

While England are unbeaten on Southgate's watch, they are yet to produce a performance that has got fans off their seats.

After a laboured 2-0 win over Malta, they were fortunate not to lose in a 0-0 draw away to Slovenia.

Against Scotland, they struggled to create chances and might have found themselves level early in the second half had the Scots taken their opportunities at 1-0.

England's efforts to build play up from the back were unconvincing, but Southgate, 46, will task his players to press on with the tactic against a Spain team who are masters of the art.

"It's a good means of gauging progress because they've been one of the best for such a long time," says Tottenham Hotspur's Eric Dier, who made his England debut in a 2-0 loss away to Spain a year ago.

"You always want to measure yourselves against sides like that, both personally and as a team. Obviously, results are what count in senior football but performing the right way as well is important.

"If we defend for 90 minutes and score a last-minute winner on Tuesday then probably everyone goes home happy. But that's not my way of assessing whether we've done well or not."

Like England, Spain go into the game on the back of a slightly flattering victory that kept them top of their World Cup qualifying pool: in their case a 4-0 win over Macedonia on Saturday.

Lopetegui, 50, is unbeaten in five games since taking charge after Vicente del Bosque stepped down following their last-16 exit at the hands of Italy at Euro 2016.

Both coaches are expected to shuffle their starting XIs, but for Lopetegui necessity will be the mother of invention as he is without several first-team players.

Sergio Ramos, Gerard Pique, Jordi Alba, Andres Iniesta and Diego Costa are all absent and Alvaro Morata is a doubt after being forced off half an hour from full-time against Macedonia.

"It is clear that the three points at stake were (against Macedonia) and now we have a fantastic game against a great national team like England," said Lopetegui.

"We want to be competitive and play well, so whoever plays it will be a good 11."

With Ramos and Pique sidelined, Lopetegui has been obliged to rely on an unconvincing centre-back pairing of Nacho and Marc Bartra, which will give hope to England's forwards.

Dier's Tottenham team-mate Harry Kane will not take part after he returned to his club to build up match fitness following a lay-off with an ankle injury.