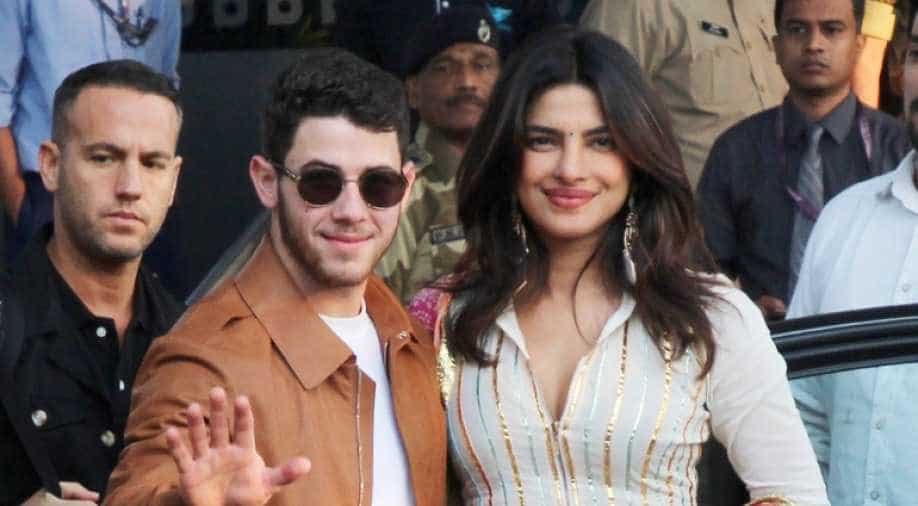 Priyanka Chopra and Nick Jonas clicked in Mumbai on Thursday as they left for their Jodhpur wedding. Photograph:( WION Web Team )

“Every girl dreams of being a princess on her wedding day,” Chopra, 36, tells People magazine in their cover story. “But I never had a plan about what I wanted it to be.”

The wedding photos and video of Priyanka Chopra and Nick Jonas' grand wedding are finally out. The couple sold the rights of the photos to People magazine prior to their wedding and the magazine's latest issue gives sneak peek into the grand wedding.

The couple got married twice- one Hindu wedding and the other a Christian one that Nick's father officiated. Also see: The first pics of Nick Jonas and Priyanka Chopra as husband and wife

For the white wedding, Priyanka chose a white Ralph Lauren gown with a long trail which was 75 feet long. Even Nick wore a Ralph Lauren tuxedo. The choice of the designer was symbolic as the two had first met at the Met Gala in 2017 while representing Ralph Lauren on the red carpet. Priyanka is also the first woman the designer has designed a wedding gown for. He has earlier only made wedding gowns for own family members.

Priyanka Chopra and Nick Jonas’s wedding was straight out of a fairy tale and we’ve got the exclusive first look! 💕 Head to our Insta Story for all the romantic details… Photo: © Purple Pebble America, LLC and NJJ Entertainment, LLC 2018/ Jose Villa/Getty Images

A post shared by TheWeddingBrigade.com (@theweddingbrigade) on Dec 4, 2018 at 4:38am PST

“Every girl dreams of being a princess on her wedding day,” Chopra, 36, tells the magazine in their cover story. “But I never had a plan about what I wanted it to be.”

“It melted my heart,” adds the Quantico actress. “Being able to have two big weddings, in India, with our closest family and friends was unbelievably special.”

A post shared by TheWeddingBrigade.com (@theweddingbrigade) on Dec 4, 2018 at 4:18am PST

Hosting an epic wedding weekend for 225 guests including Jonas’s brothers Kevin (with wife Danielle), Joe (with fiancée, actress Sophie Turner) and Frankie along with Chopra’s brother Siddharth- the couple held court for four days at the Umaid Bhawan Palace in Jodhpur.

For the Hindu wedding, both chose Sabyasachi Mukherjee designs. While Nick wore a golden sherwani, Priyanka looked stunning in a red lehenga-choli.

“It was all tears. All tears” says the actress, who carried a bouquet of hyacinths and tuberoses as she walked down the aisle. “I could not hold it in. I think I was nervous and scared. But as soon as the curtains opened, and I saw his face it was just like everything settled and I knew I was making the best decision of my life.”

#NickJonas and #PriyankaChopra open up about their "emotional" wedding. Tap the bio link to see more stunning photos and get all of the details on their five-day celebration in India. | 📷: (c) Purple Pebble America, LLC and NJJ Entertainment, LLC 2018. Photographs by @JoseVilla/Getty Images

“I love that our wedding was a religious mash-up,” says the actress in the interview to People. “We took beautiful traditions that we both grew up with and personalized them in a way that made sense for us. It’s been incredible to find the commonalities between our beliefs and figuring out how to blend them in a respectful and meaningful way."

And you may kiss the bride ❤️❤️❤️❤️ #priyankachopra #nickjonas @viralbhayani

The couple will be hosting a reception in New Delhi on Tuesday night. PM Modi is expected to attend the event. They will also host a Mumbai reception for Bollywood celebrities.