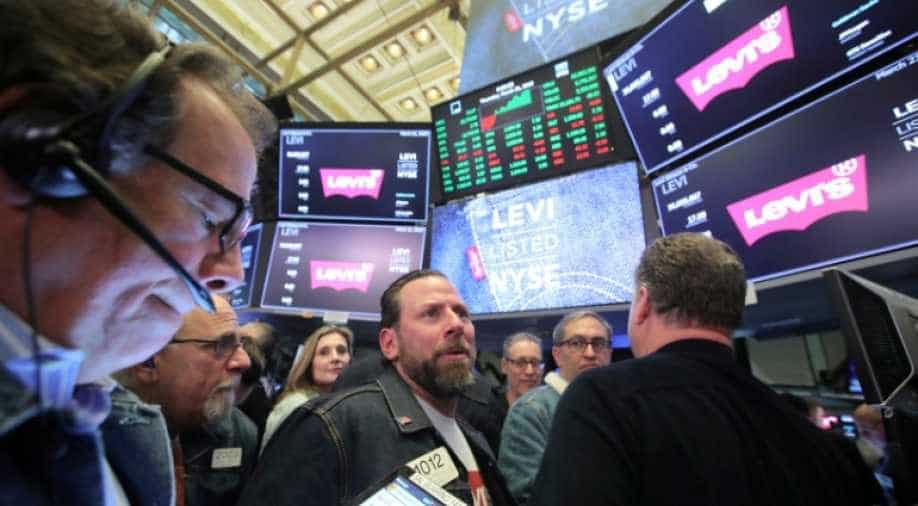 IPO on the floor of the New York Stock Exchange (NYSE) in New York, US. Photograph:( Reuters )

The 165-year-old US company's return to the public market comes at a time when stocks are near all-time highs and the popularity of denim is surging, driven by the resurgence of 1990s styles such as high-waist and pinstriped jeans.

Shares in Levi Strauss & Co surged 31 per cent in their debut on Thursday, giving the jeans maker a market value of $8.7 billion and suggesting strong investor appetite before much-awaited listings from Lyft and Uber.

The 165-year-old US company's return to the public market comes at a time when stocks are near all-time highs and the popularity of denim is surging, driven by the resurgence of 1990s styles such as high-waist and pinstriped jeans.

"I'm not going to live or die by what the stock does day in and day out," Chief Executive and President Chip Bergh said in a telephone interview. "We're here to run the business for the long term. It is humbling that the stock was so well received today. That is pretty awesome."

The self-proclaimed inventor of the blue jeans, which has grown to become one of the world's most recognised denim brands, Levi Strauss hopes to use a part of the proceeds from the IPO to expand in emerging markets such as Brazil, China and India.

"Denim continues to prove prevalent in streetwear and on the runway, so we're not expecting it to go anywhere anytime soon," an analyst at retail analytics firm Edited said. "That's why now is a great time for Levi's to capitalise on this momentum."

Levi accounted for 5 per cent of the global jeans market in 2018, according to market research firm Euromonitor. The market has remained flat from 2013 to 2018 but is expected to grow at a compound annual growth rate of 2 per cent until 2023 if prices remain at 2018 levels.

Going forward, Bergh also said Levi can double its business in Asia in the next couple of years "and then double it again".

Levi does not disclose its earnings in China but Bergh said it makes up around a quarter of its total Asia business, which had just over $800 million in revenue last year.

Levi first went public in 1971. It then sold 1.27 million shares at $47 each and the stock opened at $60, according to a New York Times report. After 14 years, it was taken private by the Haas family, the descendants of founder Levi Strauss, in a $1.6 billion leveraged buyout.

Levi's second IPO was priced at $17, above the expected range, in an oversubscribed offering. By Thursday afternoon, the shares had hit a high of $23.15.

Levi's market splash marks the start of what could be a blockbuster year for IPOs with several high profile companies expected to list their shares.

Ride-hailing service provider Lyft Inc kicked off the investor roadshow for its market debut on Monday, while larger rival Uber is expected to go public in April.

The Haas family, which has over 100 members and is between its fifth and sixth generations, according to Bergh, will retain 80 per cent voting control of the public company.

Bergh said a desire among existing shareholders to diversify, coupled with strong corporate performance and supportive market conditions, led to the decision to go public in 2019.

"The market is pretty ripe and we're the first big IPO of the year," he said. "There was a lot of pent-up demand because it's been pretty slow the last couple of months and that was also probably a tail-wind for us."

The company's $8.7 billion market capitalisation at the start of trading is based on outstanding shares of about 390 million, which includes the over-allotment option.

"There is a lot to like when it comes to Levi Strauss the brand and its outlook moving forward," said Jeff Zell, senior research analyst and partner at IPO tracking firm, IPO Boutique.

"The company and the underwriters targeted a reasonable valuation to start and allowed the true investor demand to dictate price which ultimately came one dollar above range."

Levi's revenue rose 14 per cent to $5.6 billion in 2018, the bulk of which came from men's denim. Its biggest market in the Americas, accounting for 55 per cent of overall revenue.

The San Francisco-based company sells in 110 countries through 50,000 retail stores, and its rivals include Gap Inc and VF Corp's Lee and Wrangler brands.

To attract young customers, Levi's is planning to expand its tailor shop and print bar that allow consumers to customise and put their own designs on the company's branded jeans and T-shirts.