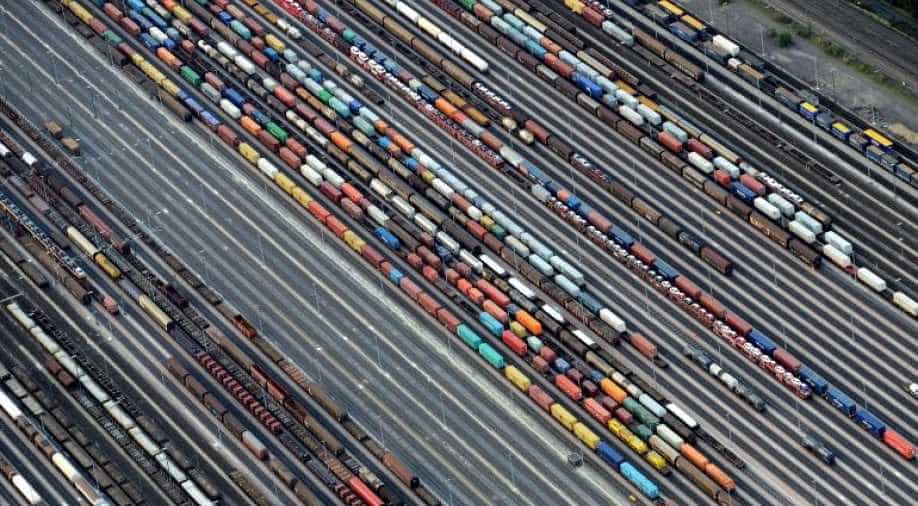 Containers and cars are loaded on freight trains at the railroad shunting yard in Maschen near Hamburg September. Photograph:( Reuters )

In its quarterly economic forecasts, the European Union's executive arm said prices would grow less than previously predicted, pushing the inflation rate further off the European Central Bank's target of close to but less than 2 per cent.

The European Commission lowered its estimates on Wednesday for eurozone growth and inflation, saying uncertainty over US trade policy posed a major risk to the bloc.

In its quarterly economic forecasts, the European Union's executive arm said prices would grow less than previously predicted, pushing the inflation rate further off the European Central Bank's target of close to but less than 2 per cent.

The commission confirmed its prediction that economic growth in the euro zone would slow this year to 1.2 per cent from 1.9 per cent in 2018. It also revised down its estimate for next year's growth, which is now seen at 1.4 per cent instead of the 1.5 per cent forecast in May.

Risks for the bloc have increased, the commission said, and mostly come from "the elevated uncertainty" around United States' trade policy, as Washington keeps threatening punitive tariffs on a broad range of EU products.

"This could lead to rapid tightening of global financial conditions," he added.

The weaker economic outlook contributed to a downward revision of inflation expectations, the commission said, cutting its estimate to 1.3 per cent for this year and next from the 1.4 per cent it previously estimated for both years.

This year's forecast matches the ECB's projection, but for 2020 the commission's estimate is lower than the 1.4 per cent rate forecast by the central bank in its latest projections, released in June. That could give the ECB a reason to push ahead with fresh stimulus.

The commission confirmed the economic slowdown in the euro zone was mostly caused by weaker growth in Germany, the euro zone's largest economy, and Italy, its third largest.

German growth will slow to 0.5 per cent this year, in line with earlier predictions, after reaching 1.4 per cent in 2018. Growth is expected to return to 1.4 per cent next year, less than the 1.5 per cent the commission predicted earlier.

Forecasts for Italy remained unchanged, reiterating its economy will barely grow this year, seeing the worst growth rate in the whole EU. Next year's growth is expected to accelerate to 0.7 per cent but remain the slowest in the bloc.

France's economy will expand 1.3 per cent this year and 1.4 per cent in 2020, the commission estimated, leaving unchanged its forecast for this year but lowering the estimate for the next, earlier seen at 1.5 per cent.

The commission maintained unchanged its forecasts for Britain, whose economy is foreseen growing 1.3 per cent this year and next. However, the projection does not take into account possible trade disruptions caused by a no-deal Brexit.