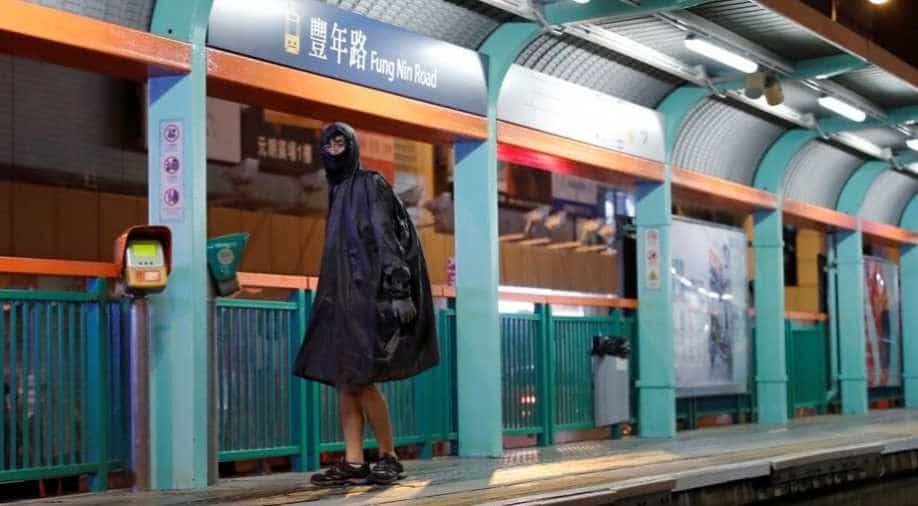 An anti-government protester wears a raining coat with half his face covered during a demonstration after a government’s ban on face masks under emergency law, at Yuen Long, in Hong Kong, China. Photograph:( Reuters )

The protests, which show no sign of abating, pose the biggest popular challenge to Chinese President Xi Jinping since he came to power in 2012.

Hong Kong opened for business on Tuesday after a violent long weekend, with its metro rail system only partially functioning and authorities warning residents they may have trouble commuting due to widespread vandalism of infrastructure.

The Chinese-ruled city braced for more demonstrations through the week and embattled leader Carrie Lam was due to address the media at a weekly news conference on Tuesday morning after the most violent clashes in around four months of anti-government unrest.

The protests, which show no sign of abating, pose the biggest popular challenge to Chinese President Xi Jinping since he came to power in 2012.

Two teenage protesters have been shot, one in the chest and the other in the leg, during skirmishes with police in some of the recent violence.

Hong Kong's metro, which carries about 5 million passengers a day, said on Tuesday some stations would not open for service because damaged facilities needed to be repaired. Train service would also end at 8 pm (1200 GMT), more than four hours earlier than normal.

MTR Corp was forced to shut down in an unprecedented move after arson attacks on Friday night and only partially operated during the weekend, with protesters again setting stations ablaze and destroying ticketing machines. The closures largely paralysed transportation around much of the Asian financial hub.

The Hong Kong government said in a statement early on Tuesday "a large group of masked rioters repeatedly committed destructive acts extensively", including "dropping a bicycle from height" that hit and injured a police officer. Roads were also blocked in various districts, it said.

ATMs, Chinese banks and scores of shops were vandalised during violent protests over the long weekend, some of which drew tens of thousands of people. Many restaurants and malls closed early over what is typically a very busy holiday period.

That followed the decision by authorities to impose a ban on face masks, which protesters use to protect their identity, on Friday under colonial-era emergency powers.

The protests have plunged the former British colony into its worst political crisis in decades and are taking a growing toll on Hong Kong's economy, hitting its important tourism and retail sectors as it faces its first recession in a decade.

What started as opposition to a now-withdrawn extradition bill has grown into a pro-democracy movement against what is seen as Beijing's increasing grip on the city, which protesters say undermines a "one country, two systems" formula promised when Hong Kong returned to Chinese rule in 1997.

The ban on face masks inflamed protests and angered many Hong Kongers who fear a further erosion of their civil liberties.