Winter storm batters US; one killed, thousands of flights cancelled 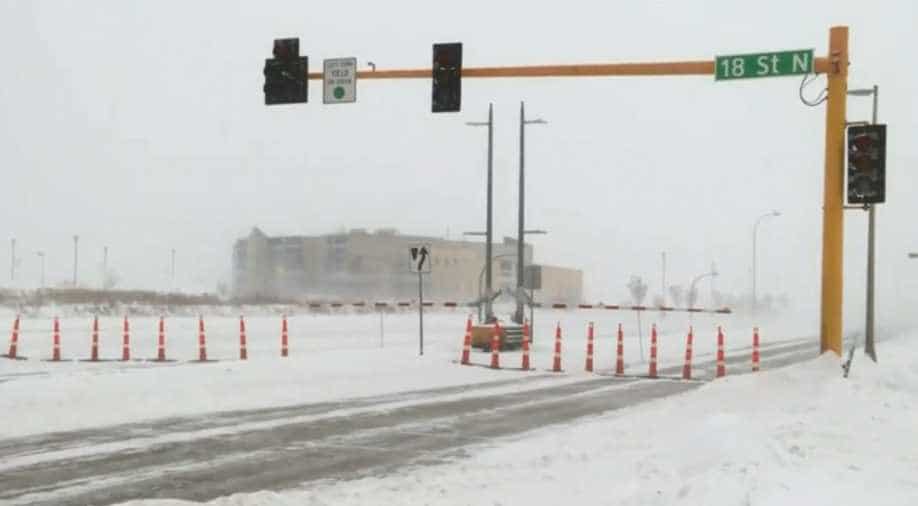 Parts of the US Midwest and Southeast were being hit with the first wave of heavy snow and rain expected in the central United States through the weekend.

A motorist was killed in Kansas on Thursday in a crash blamed on a fierce blizzard slamming the US Midwest and Southeast that also canceled or delayed thousands of airline flights and injured two people on a commercial jet over the Dallas area.

The traffic fatal crash along Interstate 70 near the city of Oakely prompted the Kansas Highway Patrol to shut down a portion of the major east-west artery.

"Please stay off the roads and stay safe, give (the Kansas Department of Transportation) time to clear ... them, it's not worth your life," Trooper Tod Hileman, the highway patrol's public information officer, said on Twitter.

No other details were immediately available on the collision; the name of the victim was not released. Hileman said roads were expected to remain snow-packed and icy into Friday.

The fatality came as parts of the US Midwest and Southeast were inundated with the first wave of heavy snow and rain expected in the central United States through the weekend, said Marc Chenard, a meteorologist with the National Weather Service.

"Through this morning there have already been amounts as high as 6 to 10 inches across those areas and additional snowfall of 10 inches is possible throughout the day and tonight," Chenard said. "Travel is going to be very difficult across the areas under weather and blizzard warnings."

A passenger and a flight attendant suffered knee and back pain after an American Eagle flight operated by Mesa Airlines hit turbulence over the Dallas-Fort Worth area, American Airlines said in a statement.

The plane landed safely and the injured passenger and crew member were treated and released from a hospital in Austin, the airline said.

The blizzard contributed to the cancellation of 865 flights and delayed another 7,000, according to FlightAware.com.

In the Midwest, winter storm and blizzard warnings were in effect for parts of Kansas, Nebraska, North Dakota, South Dakota and Minnesota, the National Weather Service said.

Chenard said the storm system caused heavy rain and thunderstorms with the risk of flash floods in the southeastern United States. A tornado watch for parts of central and southwest Louisiana and southeast Texas were in effect on Thursday.

Kansas Governor Jeff Colyer on Wednesday declared a state of emergency. "We hope that travelers will be wise by paying attention to weather alerts and not unnecessarily placing themselves in harm's way as the storm moves through," Colyer said in a statement.