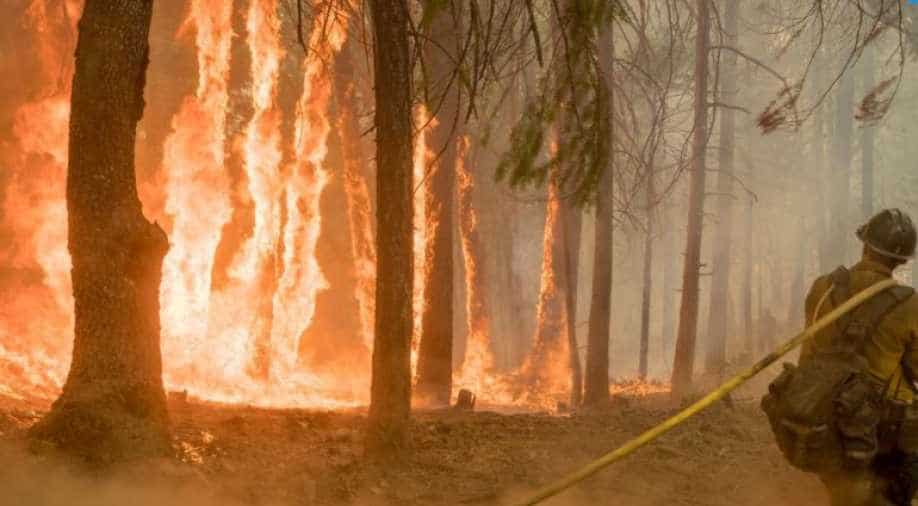 A firefighter fights fire near torching trees as a wildfire burns near Yosemite National Park in this US Forest Service photo released on social media from California, US. Photograph:( Reuters )

A fast-moving Northern California wildfire burned dozens of structures on Thursday, injuring residents and firefighters, as tens of thousands of people fled in a "chaotic" mass evacuation, state authorities said.

A fast-moving Northern California wildfire burned dozens of structures on Thursday, injuring residents and firefighters, as tens of thousands of people fled in a "chaotic" mass evacuation, state authorities said.

Driven by high winds and dry conditions, the blaze dubbed the Camp Fire swept through the town of Paradise, with social media reports that a hospital, high school and K-Mart store were on fire. State fire authorities said they could not confirm the reports.

"We had to ride through flames to get here," he said from the side of a road west of Paradise.

With limited escape routes from the town, which is built on a ridge, traffic accidents turned roads into gridlock, with residents forced to abandon vehicles and run from the flames carrying children and pets, officials said. One woman stuck in traffic went into labour, the Enterprise-Record newspaper reported.

"It’s very chaotic. It’s a very bad fire,” Officer Ryan Lambert of the California Highway Patrol said of the evacuation. "The mass population is trying to be evacuated at once, a fast-moving fire, trying to get everybody evacuated on the roads, a lot of congestion, traffic accidents."

The blaze began early on Thursday and quickly charred 18,000 acres (3,237 hectares), forcing the evacuation of the 27,000 residents of Paradise, about 150 miles (240 km) northeast of San Francisco, and other communities, the California Department of Forestry and Fire Protection (Cal Fire) said in a statement.

"It’s got all the right conditions to have grown very large, very quickly," said Cal Fire spokesman Rick Carhart. "There is significant loss of structures, and civilian and firefighter injuries." He said he did not know the number of injuries or how many structures were destroyed.

Wildfire photographer Bernie Deyo tweeted that one of the main buildings at Feather River Hospital in Paradise was on fire.

Fire authorities did not indicate how the blaze started.

California is experiencing one of its worst fire years ever, with 621,743 acres (251,610 hectares) burned through Sunday in areas covered by Cal Fire, nearly twice the amount during the same period of 2017 and nearly triple the five-year average.

The Camp Fire has cut off power to roughly 34,000 customers in Butte and Plumas counties, according to a spokesman for Pacific Gas & Electric.