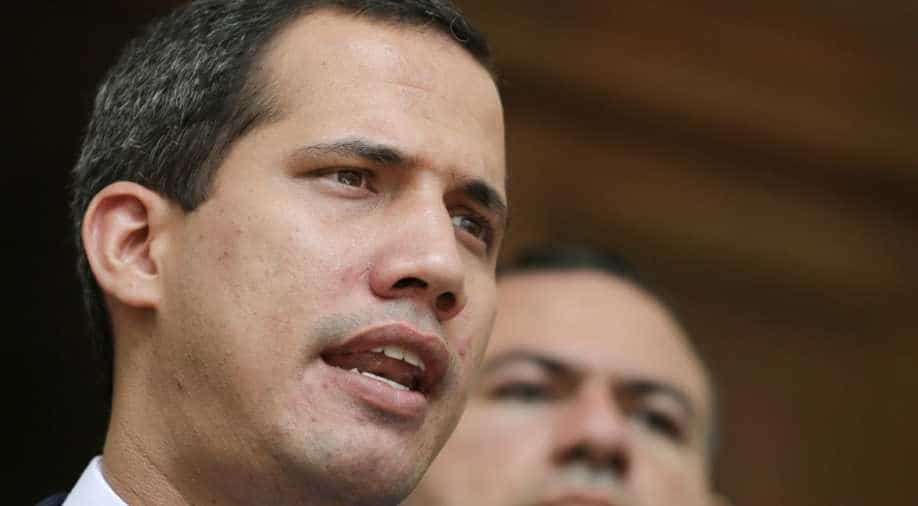 Venezuelan opposition leader Juan Guaido, who many nations have recognised as the country's rightful interim ruler, talks to the media before a session of Venezuela's National Assembly in Caracas, Venezuela. Photograph:( Reuters )

Congressional elections are held every five years, and are not scheduled until December 2020.

Venezuela's pro-government legislature holds a session on Monday amid accusations it is planning to disband the opposition-run parliament and convene early legislative elections, potentially escalating the country's political crisis.

Opposition leader Juan Guaido on Sunday said the Constituent Assembly would make the decision during a Monday session after President Nicolas Maduro called for an "offensive" against congress.

Such a move would fuel criticism of Maduro in the international community and would almost certainly halt Norway-brokered talks between the government and Guaido allies meant to reach a negotiated solution to Venezuela's political stalemate.

Diosdado Cabello, vice president of the ruling Socialist Party and head of the Constituent Assembly, on Sunday night confirmed via Twitter that a session was scheduled for Monday but did not say what would be discussed.

"Nothing will stop us, we are free and we will be victorious!!" he wrote.

A Constituent Assembly official did not respond to a message seeking details on the session.

Congressional elections are held every five years, and are not scheduled until December 2020.

The opposition in 2015 won a two-thirds majority of congress in a landslide vote, taking control of parliament for the first time in 16 years. Maduro's government refused to recognize any of its decisions and the supreme court has shot down every measure it approved.

In 2017, Maduro launched an election to create the Constituent Assembly, an all-powerful body that is officially tasked with rewriting the constitution but in practice functions as a parallel legislature with no checks on its power.

The opposition broadly boycotted that vote, and the creation of the institution was harshly criticized around the world as undermining democracy.

Guaido invoked the constitution in January to assume a rival presidency, saying Maduro's 2018 re-election was fraudulent. He has been recognized by more than 50 countries, including the United States, as Venezuela's legitimate president.

Maduro said on Saturday that Guaido will face justice for supporting the most recent round of US sanctions, which block all commercial transactions with Venezuela's government and freeze its assets in the United States.

He called on Cabello last week to begin an offensive against the "traitors" in the legislature.