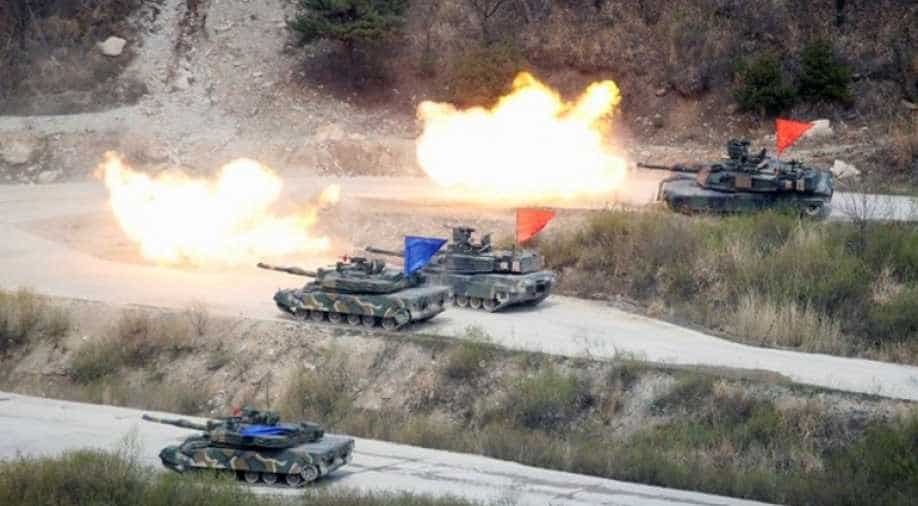 The United States and South Korea announced Tuesday that their annual joint military drills will go ahead next month, but the main exercise will be shortened by a month as a diplomatic thaw with North Korea gathers pace.

No aircraft carrier will take part in the large-scale exercises that involve tens of thousands of troops and which are a perennial source of tension between the two Koreas, with Pyongyang condemning them as provocative rehearsals for an invasion of the North.

With talks underway to set up a North-South summit, followed by a proposed face-to-face meet between Donald Trump and Kim Jong Un, there was speculation that this year's drills might be scaled back to avoid derailing the discussions.

A Seoul defence ministry spokesman Tuesday confirmed the main exercise, expected to resume on April 1, would be truncated.

"The Foal Eagle exercises will be held for a month in April due to a delay caused by the Olympics and as each military has its own schedule," the spokesman told.

Last year the drills were conducted for two months through March to April. This year's exercises had already been delayed to avoid clashing with the Pyeongchang Winter Games in the South last month.

The news came despite official statements Tuesday from both Washington and Seoul that this year's drills would be "similar" in size to previous ones.

"The UN Command has notified today the North Korean military on the schedule as well as the defensive nature of the annual exercises," Seoul's defence ministry spokeswoman told reporters.

The Pentagon added in a statement: "Our combined exercises are defence-oriented and there is no reason for North Korea to view them as a provocation."

"Foal Eagle" is a series of field training exercises with approximately 11,500 US service personnel taking part, together with 290,000 South Korean troops, while "Key Resolve" is a tabletop exercise using mainly computer-based simulations.

According to a senior South Korean envoy who made a rare visit to Pyongyang earlier this month, Kim had made it clear he "understands" the need for the drills to go ahead.

Such an acknowledgement is in stark contrast to the Kim regime's denunciations of the exercises in the past. The North has often responded to the drills with its own military actions, and last year fired four ballistic missiles close to Japan.

A spokesman at the US-South Korea Combined Forces Command (CFC) told: "At this moment, there is no plan to deploy a US aircraft carrier and other strategic weapons" during Foal Eagle.

"I think both the South and the US are staging a relatively low-key exercise in a bid not to unnecessarily provoke the North in this mood of rapprochement," Kim Yong-hyun, a professor of North Korean studies at Dongguk University.

Kim also noted the North's relatively quiet posture so far ahead of the drills - unlike in the past when its army and state media issued a storm of angry denunciations before and during the exercises.

"It's really important not only to the North but also the US and the South to put the situation under control during the drills," he said.

"I think all sides will try to spend the next few weeks as smoothly and quietly as possible."

The US, as South Korea's security guarantor, has close to 30,000 troops stationed in the South - a legacy of the 1950-53 Korean War that ended with an armistice instead of a peace treaty.

Following an extended period of escalating tensions on the Korean peninsula, last month's Winter Olympics provided the catalyst for a sudden and very rapid rapprochement that resulted in the announcements of the planned summits.

Those announcements were made by the South Koreans, who have been orchestrating the diplomatic preparations and acting as the messenger between Washington and Pyongyang.

Trump's administration is pushing ahead with plans for a summit before the end of May, but North Korea has yet to independently confirm it even extended an invitation to leadership talks - maintaining a silence that has raised some concerns in Washington and Seoul.

According to the South Korean envoy who met with Kim in Pyongyang, the North Korean leader also offered to consider abandoning his nuclear weapons in exchange for US security guarantees and flagged a halt to all missile and nuclear tests while dialogue was underway.

Kim Byung-yeon, an expert in North Korea's economy at Seoul National University, said the ever-growing layer of sanctions on the North was pushing its regime to negotiations.

"With the economic damage caused by the sanctions growing ... the North seems to have come forward for talks to curb potential frustration among its people," he said.

"I think the North will show more sincerity in upcoming negotiations than before."