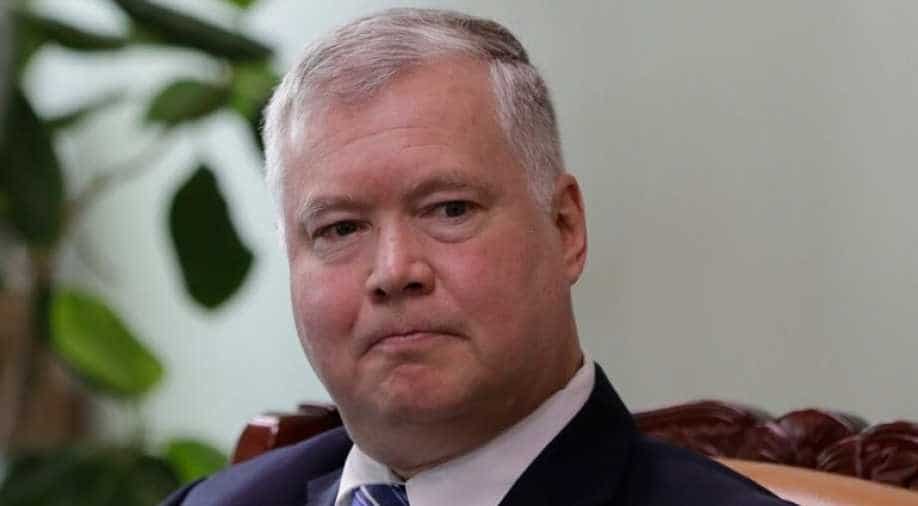 President Donald Trump announced Biegun's nomination to replace Deputy Secretary of State John Sullivan, who has been tapped to be ambassador to Russia.

Stephen Biegun, a respected US foreign policy veteran in the difficult job of leading diplomacy with North Korea, was named Thursday as the State Department number two, a role that could become even more key in coming months.

President Donald Trump announced Biegun's nomination to replace Deputy Secretary of State John Sullivan, who has been tapped to be ambassador to Russia.

The nomination is drawing particular attention amid growing speculation that Secretary of State Mike Pompeo will run for Senate next year in Kansas, meaning that Biegun could become the acting top US diplomat, at least briefly.

Biegun, whose nomination requires Senate confirmation, will remain as the special representative on North Korea, a position he took last year after Trump's historic first summit with leader Kim Jong Un, a US official said.

Biegun initially received a cold shoulder from North Korean officials who, mindful that the countries' leaders were negotiating directly about Pyongyang's nuclear program, saw little reason to deal with an envoy on anything other than summit logistics.

But Biegun enjoyed a breakthrough of sorts in early October when he met North Korea's lead negotiator Kim Myong Gil in Sweden.

North Korea walked away from the talks, denouncing the US attitude, but the United States issued a comparatively upbeat statement saying that Biegun never planned to resolve all issues in a day and that the two sides would meet again.

At a time of deep polarization in Washington, Biegun, 56, has won respect for his affability and for offering cogent analysis rather than ideological lectures.

A lifelong Republican, Biegun spent his career in behind-the-scenes roles in Congress and in former president George W. Bush's administration, where he served in senior staff positions at the White House and State Department.

William Cohen, defense secretary under Democratic president Bill Clinton, in a statement praised Biegun's "unassailable reputation for intelligence, integrity and independence" and said he had "gained the respect of others across the political spectrum and around the world."

Unlike Sullivan, who is expected to be confirmed to go to Moscow, Biegun's expertise in fact lies in Russia, where he lived from 1992 to 1994 as part of US democracy promotion work.

In an interview with an alumni publication at the University of Michigan, Biegun recalled that he became fascinated by Russia when a high school history teacher wrote "tsar" in Cyrillic script.

"It was one of the most exotic things I'd ever seen. It left such an impression on me that I went to the town library and checked out a book to teach myself Russian," he said.

A native of Michigan, Biegun was the third generation of his family to work at the Ford Motor Corp., handling the auto giant's relations with foreign governments before being tapped as the North Korea envoy.