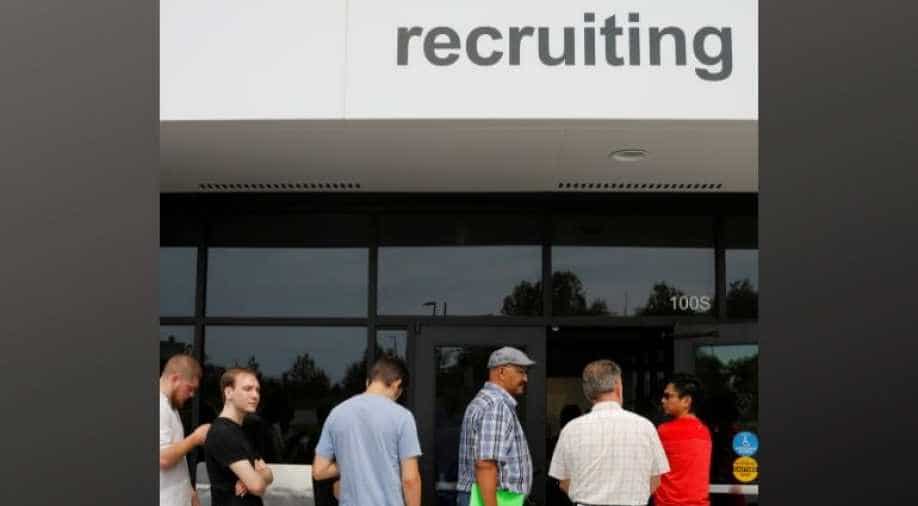 Job seekers line up to apply during 'Amazon Jobs Day,' a job fair being held at 10 fulfillment centers across the United States aimed at filling more than 50,000 jobs, at the Amazon.com Fulfillment Center in Fall River, Massachusetts, US. Photograph:( Reuters )

The four-week moving average of initial claims, considered a better measure of labor market trends as it irons out week-to-week volatility, fell 3,250 to 219,250 last week.

Initial claims for state unemployment benefits declined 13,000 to a seasonally adjusted 209,000 for the week ended July 6, the lowest level since April, the Labor Department said on Thursday. Data for the prior week was revised to show 1,000 more applications received than previously reported.

Economists polled by Reuters had forecast claims rising to 223,000 in the latest week.

The four-week moving average of initial claims, considered a better measure of labor market trends as it irons out week-to-week volatility, fell 3,250 to 219,250 last week.

The Labor Department said no claims were estimated last week. The claims data is entering a period of volatility as auto manufacturers temporarily shut down assembly plants for summer retooling.

Companies carry out the plant closures at different times, which can throw off the model the government uses to strip out seasonal fluctuations from the data.

There is still no sign of an increase in layoffs related to a trade war between the United States and China, which has helped to dim the economy's outlook and raise expectations for an interest rate cut this month, the first in a decade.

Federal Reserve Chairman Jerome Powell told lawmakers on Wednesday that the US central bank would "act as appropriate" to protect the economy from the trade tensions and slowing global growth. (Full Story)

Fed officials are scheduled to meet on July 30-31. The economy is also slowing as last year's massive stimulus from tax cuts and more government spending fades.

Manufacturing is struggling, the trade deficit is widening again, consumer spending is rising moderately and the housing sector remains mired in a soft patch.

Despite the rising risks to the 10-year old economic expansion, the longest in history, the labor market remains healthy.

The economy created 224,000 jobs in June. While the unemployment rate ticked up one-tenth of a percentage point to 3.7%, that was because more people entered the labor market, a sign of confidence in their employment prospects.

Thursday's claims report also showed the number of people receiving benefits after an initial week of aid increased 27,000 to 1.72 million for the week ended June 29, the highest level since March.

The four-week moving average of the so-called continuing claims rose 5,750 to 1.69 million.