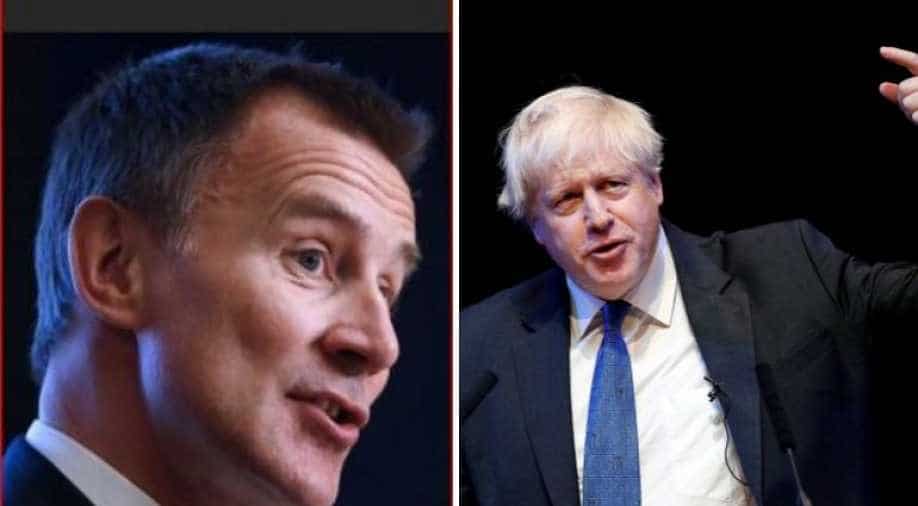 After five rounds of secret voting by MPs in the governing Conservative Party, former London mayor Johnson and Foreign Secretary Hunt are the two final contenders out of an original field of 13 hopefuls.

Britain's leadership contest starts a month-long nationwide tour on Saturday as Boris Johnson and Jeremy Hunt each seek to win over grassroots Conservatives in their bid to become prime minister.

After five rounds of secret voting by MPs in the governing Conservative Party, former London mayor Johnson and Foreign Secretary Hunt are the two final contenders out of an original field of 13 hopefuls.

The main task of runaway favourite Johnson will now be to avoid making any major blunders while out on the campaign trail, while Hunt will need to pull off a huge upset if he is to win.

Whoever takes the Tory party leadership in the week beginning July 22 and therefore becomes prime minister will then face the looming Brexit deadline of October 31.

The battle is likely to feature pledges from both contenders to get Britain out of the European Union safely and in one piece, succeeding where outgoing Prime Minister Theresa May repeatedly failed.

But the race might ultimately turn into a popularity contest between Johnson, pugnacious but affable with a tendency for gaffes and the more diplomatic and low-key Hunt.

"Mr. Johnson may stumble. His challenger must attack. It's an outside chance. But there's no other way," The Times newspaper columnist Matthew Parris wrote.

"A challenger will never win on policy," said the former Conservative MP.

The 160,000 or so paid-up Conservative members who select the center-right party's next leader are generally older and whiter than the majority of Britain's 66 million citizens.

According to commentator Parris, the group comprises "classic shire Tories", as well as poorer urban workers who are anti-European and more populist in their views.

"Finally, you have young Conservatives, including students. They are predominantly men and boys," Parris wrote.

They might be tempted to veer to the right following the drubbing the Conservatives suffered in last month's European Parliament elections at the hands of Nigel Farage's newly-formed Brexit Party.

Farage and Johnson were the two main promoters of "Leave" in the 2016 EU membership referendum that unleashed the Brexit chaos which May's successor must settle.

The political deadlock might yet have to be broken by a snap general election and Johnson is widely viewed as the one Conservative who can stand up to Farage in a battle of Brexit diehards.

A poll for The Daily Telegraph the paper for which Johnson writes a column showed six out of 10 Brexit Party backers jumping over to the Conservatives should the man known simply as Boris take charge.

The same survey showed the Conservatives losing yet more voters to Farage under Hunt's leadership.

Hunt and Johnson will appear Saturday in Birmingham, central England, for the first of 16 "hustings",  occasionally rowdy events where candidates field audience questions three days before the third anniversary of the Brexit vote.

But also seeking answers will be the 27 EU leaders who signed the divorce deal May failed three times to ram through parliament.

Both Johnson and Hunt have vowed to get better terms from Brussels or walk away without any strings attached.

It is a game of brinkmanship designed to stoke European fears of mutual economic destruction should the sides break up without a plan for future trade.

There have been few signs that it will ever work.

"Maybe the process of Brexit will be even more exciting than before because of some personnel decisions in London, but nothing has changed when it comes to our position," European Council President Donald Tusk said.

Johnson is also coming under attack from British economic policy-makers for post-Brexit promises they think are impossible to meet.

Carney noted that the EU bloc would have to lower tariffs to the rest of the world under such an arrangement.

"We should be clear that no deal means no deal," Carney said.