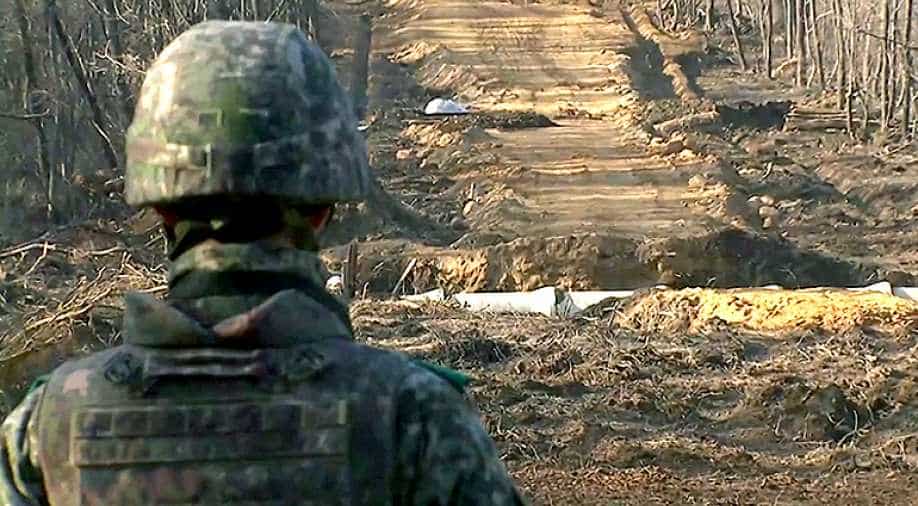 The dirt road, which is wholly within the Demilitarized Zone that divides the peninsula, will be used for joint operations next year to recover remains from the 1950-53 Korean War.

North and South Korea have connected a road across their shared border for the first time in 14 years, Seoul's defence ministry said Thursday in the latest reconciliation gesture between the neighbours.

The dirt road, which is wholly within the Demilitarized Zone that divides the peninsula, will be used for joint operations next year to recover remains from the 1950-53 Korean War.

The 12-metre-wide construction of the route in Cheorwon, near the mid-point of the DMZ, is one of several steps agreed at the Pyongyang summit between the South's President Moon Jae-in and the North's leader Kim Jong Un in September.

The neighbours also pledged to remove bunkers and weapons from the border truce village of Panmunjom.

But Seoul and Washington are pursuing increasingly different approaches to the nuclear-armed North.

The dovish Moon has pursued a policy of engagement with his isolated neighbour, while the US insists pressure should be maintained on Pyongyang until it denuclearises.

Pictures handed out by Seoul's defence ministry Thursday showed a South Korean soldier and a North Korean counterpart taking part in the "recent" roadworks holding their hands out toward each other, with their colleagues watching.

"It is historically significant for the North and the South to open a new passage and jointly engage in operations to recover remains of war dead at the place which saw the worst battles during the war," the ministry said.

Despite its name the area around the DMZ is one of the most fortified places on earth, replete with minefields and barbed-wire fences.

US Secretary of Mike Pompeo stressed this week that Washington wants to "make sure that peace on the peninsula and the denuclearisation of North Korea aren't lagging behind the increase in the amount of inter-relationship between the two Koreas".