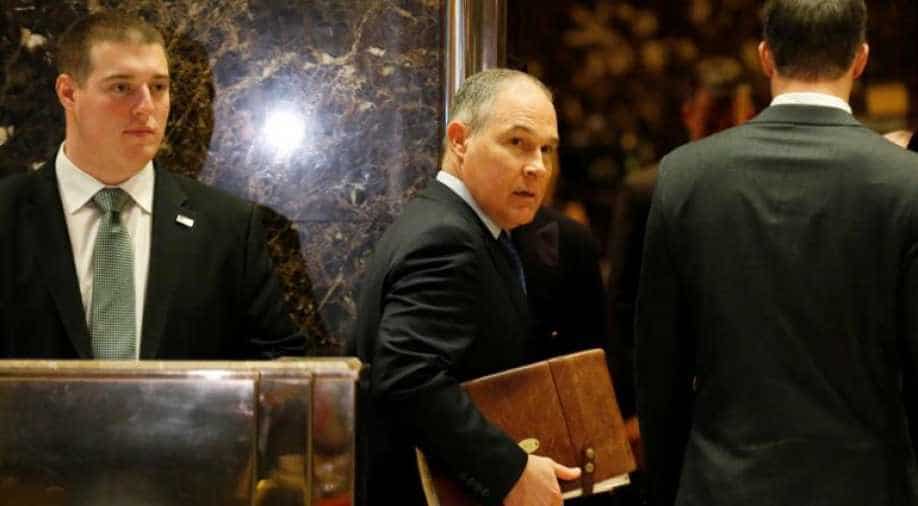 In an interview with Reuters in September, Pruitt said he sees the Clean Power Plan as a form of federal "coercion and commandeering" of energy policy and that his state should have "sovereignty to make decisions for its own markets." Photograph:( Reuters )

Pruitt has said the science on climate change is "far from settled". Pruitt is an ardent opponent of President Barack Obama's measures to curb climate change. He, along with fellow state attorneys general, sued the EPA over the EPA’s recently announced regulations seeking to curtail the emissions of methane, a powerful greenhouse gas, from the oil and gas sector, the Washington Post reports.

In an interview with Reuters in September, Pruitt said he sees the Clean Power Plan, a key part of meeting US obligations under the Paris Climate Agreement, as a form of federal "coercion and commandeering" of energy policy and that his state should have "sovereignty to make decisions for its own markets".

The Washington Post characterised him as an "ally of the energy industry" as he, along with Alabama Attorney General Luther Strange, defended ExxonMobil when it was being investigated for failing to disclose material information about climate change.

The news of the appointment was confirmed by a member of Trump’s transition team, according to Reuters.

During his election campaign, Trump vowed to pull the US out of the Paris Climate Agreement, saying that it would put American businesses at a competitive disadvantage.

Heather Zichal, a former deputy assistant to the president for energy and climate change under Obama, said Trump's choice was alarming.

"You can meet with Al Gore on Monday, pledge to keep Teddy Roosevelt's environmental legacy alive on Tuesday, but if you nominate the Clean Power Act's leading opponent to head the EPA on Wednesday, you're making an unequivocal statement about the direction of your leadership," Reuters quoted her as saying.

Vermont Senator and Democratic candidate for the presidency Bernie Sanders called Trump's pick to run the EPA "sad and dangerous".

Trump's nominee to lead EPA, Scott Pruitt, is a climate denier who's worked closely with the fossil fuel industry. That's sad and dangerous.