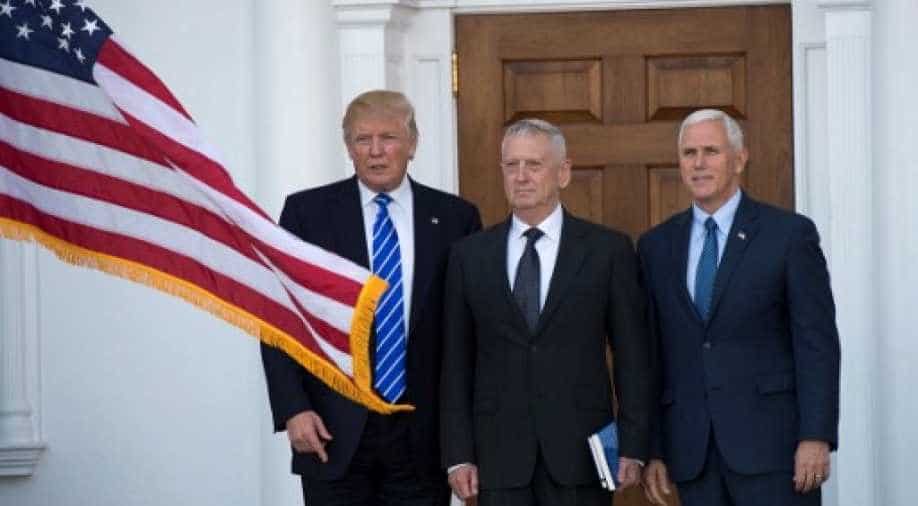 Former marine James 'Mad Dog' Mattis may become the next Pentagon chief after US President-elect Donald Trump was effusive in his praise for him on Twitter.

Calling him a "true general's general" on Twitter, Trump said Mattis was "being considered for Secretary of Defense".

A colourful combat commander and voracious reader, Mattis has been quoted as saying, 'Be polite, be professional, but have a plan to kill everyone you meet'

Although Trump has yet to announce his entire team, his selection of his cabinet so far has been assailed by Democrats and his critics. His naysayers say people who have been handpicked by Trump to hold key judicial and diplomatic posts under his administration have dubious antecedents.

Trump has also moved to mend fences with moderate Republicans as he goes about building a new administration, interviewing one-time foe Mitt Romney for secretary of state, and inviting his ousted transition chief Chris Christie for a sit-down Sunday at his Trump National Golf Club.

Vice president-elect Mike Pence informed that Trump's critic Mitt Romney was also under "active consideration" to become the next Secretary of State.

He and Vice President-elect Mike Pence began their day attending a Sunday service at a Presbyterian church in the New Jersey countryside.

The 70-year-old Republican billionaire promised reporters they would "hear some things" after a second marathon day of meetings at his New Jersey golf retreat, a 90-minute drive from Manhattan.

"General James 'Mad Dog' Mattis, who is being considered for Secretary of Defense, was very impressive yesterday. A true General's General!" Trump said on Twitter.

The 66-year-old Mattis, who called Trump "the real deal" after their meeting Saturday, is a retired Marine Corps general who led the US Central Command from 2010-2013, overseeing the US withdrawal from Iraq and a surge in Afghanistan.

A colourful combat commander and voracious reader, he has been quoted as saying, "Be polite, be professional, but have a plan to kill everyone you meet."

Chris Christie, who threw his support to Trump after his own bid for the Republican presidential nomination fizzled, appeared back in favour after being pushed out as transition chief.

The New Jersey governor has been under a cloud over a scandal involving the closing of a major bridge linking New York and New Jersey, allegedly to punish a Democratic mayor. Two former Christie aides were recently convicted in the case.

Asked on Saturday if "Bridgegate" disqualified the governor from serving in the cabinet, Trump retorted: "We like Chris a lot."

Trump will also meet with Bob Johnson, the founder of Black Entertainment Television (BET) who has urged African Americans to vote for their best interests rather than be wedded to any political party.

Trump's interview with Romney, the 2012 Republican presidential candidate who called him a "fraud" during the campaign, suggested to some observers that he is looking for a mix of views despite the hard-line cast of his national security team so far.

Romney himself said nothing after Saturday's session. But Pence confirmed that Romney was under consideration for secretary of state, a post also sought by Giuliani and others.