Trump did well with women voters despite sex assault allegations 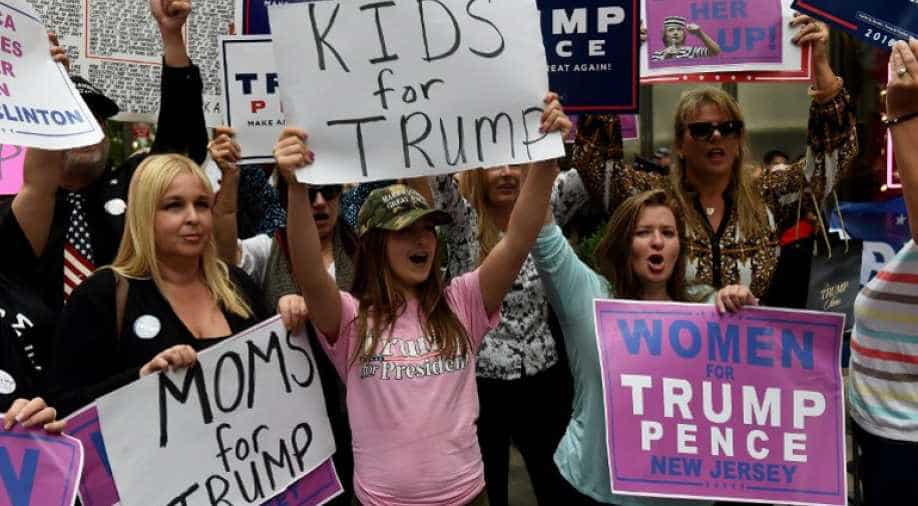 Some 53 per cent of white women voters supported the Republican candidate, exit polls said, the majority of them (62%) non-college educated. Photograph:( AFP )

Despite sex assault allegations hounding him, fat-shaming a former beauty queen and his controversial abortion stand, a large number of women voters helped put Donald Trump in the White House.

Though his rival, Democratic candidate Hillary Clinton, clinched 54 per cent of the female vote, Trump was backed by 42 per cent of women voters, which contributed to his stunning victory, according to CNN exit polls.

Some 53 per cent of white women voters supported the Republican candidate, CNN said, the majority of them (62 per cent) non-college educated.

Hillary Clinton, clinched 54 per cent of the female vote

The results upended predictions that sexist and degrading comments Trump made against women would sway female voters, who accounted for about 52 percent of the electorate on Tuesday, in favour of a candidate that could have broken the glass ceiling.

Experts said the outcome is not surprising, and reflects an election in which issues about the economy, jobs and immigration were much higher on all voters' priority list than gender issues.

"At the heart of it is what was driving all voters," said Diane Heith, professor and chair of the Department of Government and Politics at St John's University in New York.

Heith said although the leaked Access Hollywood tape in which Trump boasted about groping women, and his disparaging comments about a former Miss Universe had made many women cringe, it was not enough to turn them against the candidate.

"There was no sisterhood created," Heith said. "The issue of how he treated women did not overshadow the attitudes these individuals already had, being disaffected and how they had been treated by the establishment elite of which Hillary was absolutely part of."

Still, the real estate magnate's shock win has left many women struggling to cope with the election of a president whose misogynistic behavior was disregarded at the polls.

"More than half of white women voted for the man who bragged about committing sexual assault on tape, who said he would appoint Supreme Court justices who would overturn Roe vs Wade, who has spent 30-plus years in the public eye reducing women to their sexual attributes," wrote LV Anderson in an article in the online current affairs magazine Slate.

One issue of particular concern for women, both Democrats and Republicans, will be how Trump deals with abortion rights while in the White House.

Trump moved further and further to the right on abortion during his campaign, at one point, suggesting that women who seek to terminate their pregnancy should be subject "to some form of punishment" should abortion be outlawed.

He backtracked on his remarks following an outcry. But it's unclear where he really stands on the issue, especially considering his running mate Mike Pence's views on abortion.

As governor of Indiana, Pence pushed for some of the most abortion-restrictive regulations in the country and has fought to defund Planned Parenthood, which offers reproductive health services, including abortions, to mostly lower-income Americans.

"American women who are seeking reproductive freedom should be concerned about a Trump-Pence presidency," Heith said.

Juliet Williams, professor of gender studies at the University of California, Los Angeles, said Trump's shocking win could be attributed to a disconnect, both among Republicans and Democrats, when it came to women's voting.

"A narrative about this election took hold very early on and that narrative was that Trump was mobilizing the angry white man vote, with angry white men (such as) coal miners in West Virginia or unemployed auto workers in Michigan," Williams said.

"Frankly, all of us on the right and the left really should have wondered what the angry white vote means," she added.

"What we learned yesterday is that angry white women have political power too ... and if you allow yourself to forget about women, you are going to lose. This is what happened to Hillary."