Trump abandons Western countries at G20, sidles up to Putin 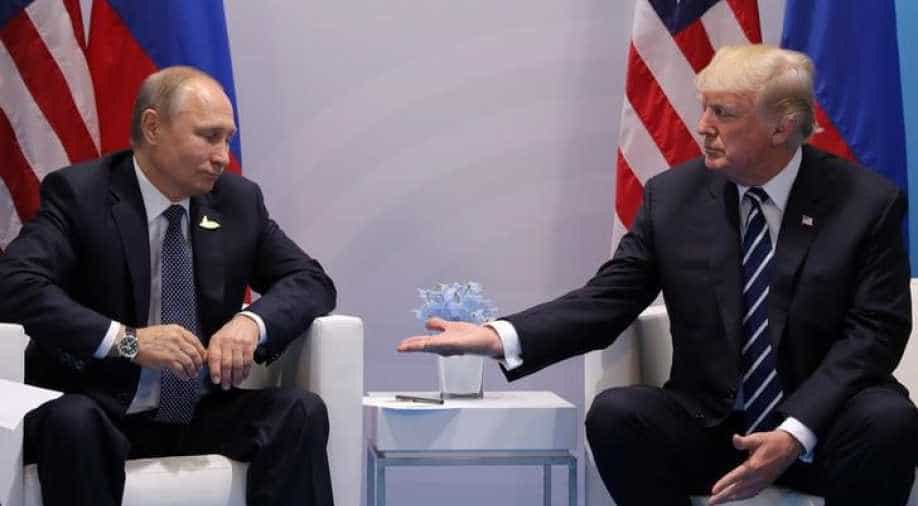 US President Donald Trump meets with Russian President Vladimir Putin during the their bilateral meeting at the G20 summit in Hamburg, Germany July 7, 2017. Photograph:( Reuters )

Trump split with US intel by accepting Putin's claim Russia didn't interfere in the US election, then pledged to work with Russia on cybersecurity ||Trump also split with all Western leaders by reversing the US pledge to achieve the targets set out in the Paris climate accord

Trump was out of sync with the leaders of Western countries at the G20, but showed a close fondness for Vladimir Putin.

Trump was the only leader of the world's major economies to reverse his country's pledge to achieve the climate goals set out in the Paris climate accord, which the 19 other countries called "irreversible".

Trump and Putin said they look forward to working together on cybersecurity, even though multiple US intelligence agencies say Russia launched a broad cyber campaign against the United States to interfere with the 2016 election, with the specific aim to get Trump elected.

Trump emerged from the G20 saying he "accepted" Putin's claim that Russia did not interfere in the election.

The US president tweeted today (June 9) that Putin "vehemently denied" interfering in the presidential election.

I strongly pressed President Putin twice about Russian meddling in our election. He vehemently denied it. I've already given my opinion.....

...We negotiated a ceasefire in parts of Syria which will save lives. Now it is time to move forward in working constructively with Russia!

Putin & I discussed forming an impenetrable Cyber Security unit so that election hacking, & many other negative things, will be guarded..

...and safe. Questions were asked about why the CIA & FBI had to ask the DNC 13 times for their SERVER, and were rejected, still don't....

This comes even though on June 26, 2017, he posted a Tweet in which he appears to accept that there was in fact Russian meddling in the US election. However, he blamed Obama, not Russia, for it.

The real story is that President Obama did NOTHING after being informed in August about Russian meddling. With 4 months looking at Russia...

Trump's position also appeared in contrast to that of Haley's position who said on Sunday that "everybody knows" Russia meddled in the 2016 elections and now they were trying to "save  face".

"What I understand is that President Trump let them know that, look, we know you did this (meddled in US elections), and cut it out. And President Putin is never going to admit that they did it. And so they have to come back and they have to defend themselves," Nikki Haley told CNN.

This comes just as the Washington Post reported that Russian government hackers have penetrated energy and nuclear company business networks.

Trump also made a peace deal with Russia regarding Syria which, as the Daily Beast summarises: Will leave dictator Bashar al-Assad in power, who, this April, Trump said "needed to go" because of his alleged chemical weapons attacks on his own people. The deal will permits the idea of "safe zones" proposed by Russia and its backers, and it depends on cooperation from Moscow, including the use of Russian troops to patrol parts of the country.

Highly anticipated was Trump's first meeting as president with Vladimit Putin. Media outlets have stated it is their first meeting together, but more precisely it is definitely the first time Trump has met Putin as US president; it is not exactly clear that they have never met.

There are currently several ongoing investiations into Donald Trump and his administration's links to Russia.

The Justice Department has appointed former FBI Director Robert Mueller as special counselor to lead the DOJ investigation into "any links and/or coordination between the Russian government and individuals associated with the campaign of President Donald Trump."

Mueller is also leading a criminal investigation to see if obstruction of justice, witness intimidation or perjury were committed by anyone involved in his other investigation, including President Trump.

So is the Senate Judiciary and also the House Oversight and Government Reform Committees are also investigating Trump and Russia.