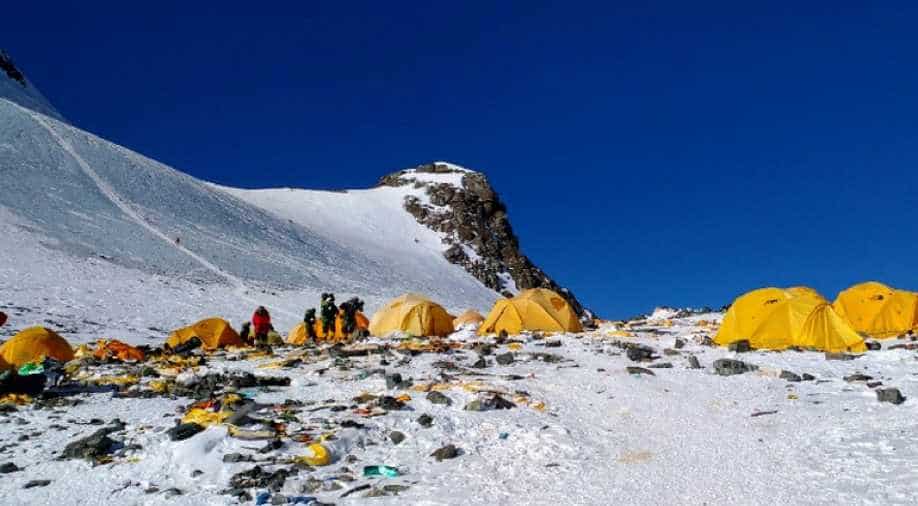 More than 200 climbers were taking advantage of clear weather on Wednesday to attempt to summit from both Nepal and China, but teams had to line up for hours to reach the top -- risking frostbite and altitude sickness.

A huge queue of climbers has formed near the summit of Mount Everest as expedition organisers Thursday reported two more deaths on the world's highest mountain.

More than 200 climbers were taking advantage of clear weather on Wednesday to attempt to summit from both Nepal and China, but teams had to line up for hours to reach the top -- risking frostbite and altitude sickness.

An American and Indian climber are the latest fatalities, their expedition organisers said, on one of the busiest-ever days on the 8,848-metre (29,029-foot) peak.

Donald Lynn Cash, 55, collapsed at the summit on Wednesday as he was taking photographs, while Anjali Kulkarni, also 55, died while descending after reaching the top.

Kulkarni's expedition organiser, Arun Treks, said heavy traffic at the summit had delayed her descent and caused her death.

"She had to wait for a long time to reach the summit and descend," said Thupden Sherpa. "She couldn't move down on her own and died as Sherpa guides brought her down."

Pasang Tenje Sherpa, of Pioneer Adventure, told AFP that Cash collapsed on the summit and died close to Hillary Step as guides were bringing him back.

The deaths take the toll on Everest to four this season, after an Indian climber died last week and an Irish mountaineer is presumed dead after he slipped and fell close to the summit.

Mountaineering in Nepal has become a lucrative business since Edmund Hillary and Tenzing Norgay made the first ascent of Everest in 1953.

The Himalayan nation has issued a record 381 permits costing $11,000 each for this year's spring climbing season, sparking fears of bottlenecks en route to the summit if poor weather cuts down the number of climbing days.

Most Everest hopefuls are escorted by a Nepali guide, meaning more than 750 climbers will tread the same path to the top in the coming weeks.

At least 140 others have been granted permits to scale Everest from the northern flank in Tibet, according to expedition operators. This could take the total past last year's record of 807 people reaching the summit.

Many Himalayan mountains -- including Everest -- are at peak climbing season, with the window of good weather between late April and the end of May.

At least six other foreign climbers have died on other 8,000-metre Himalayan peaks this season, while two are missing.