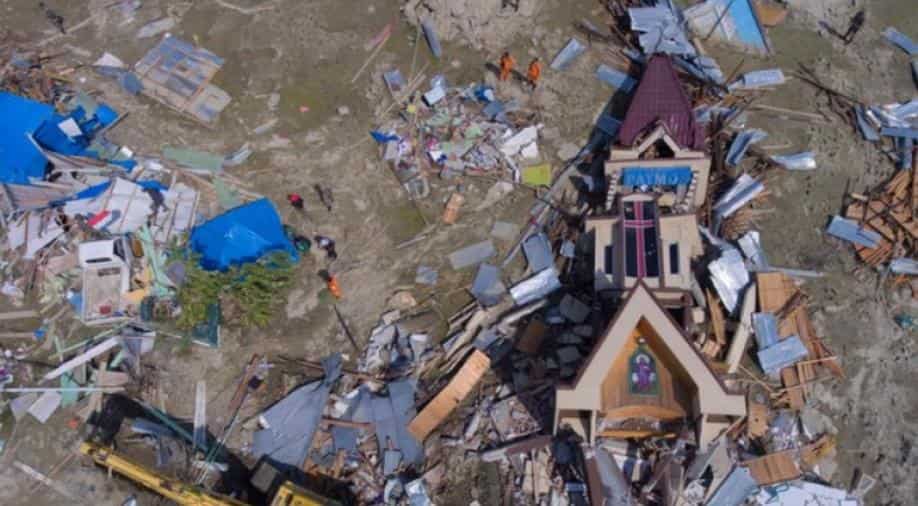 An aerial view of evacuation process near a collapsed church after an earthquake in Sigi. Photograph:( Reuters )

Indonesia has called off the search for those killed in a 7.5-magnitude earthquake and tsunami on Sulawesi island on September 28.

Indonesia has called off the search for those killed in a 7.5-magnitude earthquake and tsunami on Sulawesi island on September 28. Here are the latest figures from the disaster.

- 994 -
Victims buried in mass graves to prevent the spread of disease. The remainder were laid to rest by their families.

- 3 -
Monuments and green spaces planned as memorials to quake victims in Palu and nearby Sigi district.

- 1600 -
The number of inmates still on the run nearly two weeks after the quake brought down the walls of six prisons.

- 11 -
The maximum height, in metres (36 feet), that the tsunami reached as it barrelled through Palu Bay and smashed into the foreshore.

- 522 -
Aftershocks that have rattled the disaster-ravaged city since the main quake.

- 200,000 -
Those in dire need of humanitarian assistance in Palu and surrounds.

-87,725 -
Displaced by the quake, with many living in tents outside their damaged homes or in emergency shelters.

- 2 -
The number of years it could take before all these people are back in homes.