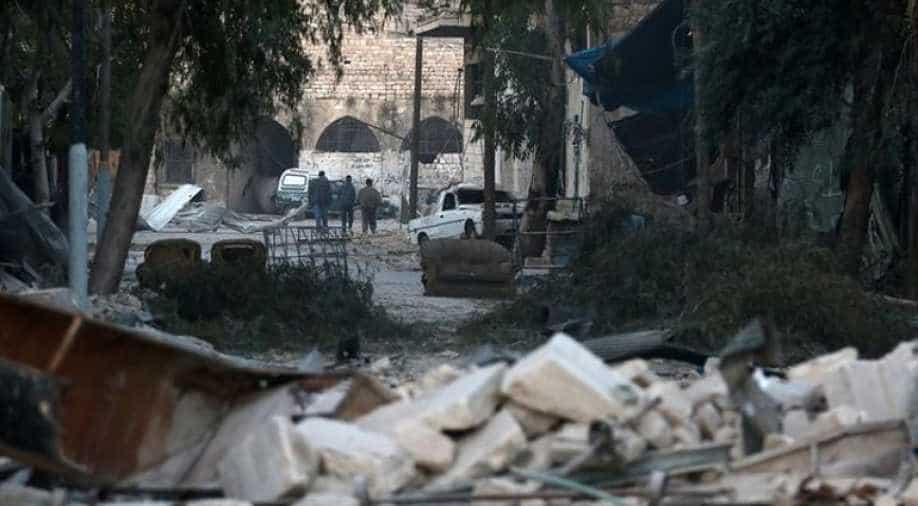 Hundreds of people have been killed since the air strikes resumed on Tuesday. Photograph:( Reuters )

A barrel bomb killed a family of six in rebel-held eastern Aleppo early on Sunday and rebel shelling killed eight children at a school in the government-held sector almost a week into one of the heaviest government bombardments of Syria's civil war.

Two medics said the al-Baytounji family had suffocated to death because the barrel bomb, which fell in the Sakhour district at about midnight, had been laced with chlorine gas.

The Syrian Observatory for Human Rights, which monitors the war, confirmed the bombing but could not confirm that chlorine gas was used. Damascus has denied use of the gas, which would contravene the international Chemical Weapons Convention.

Rebel shelling killed at least eight children, aged from six to 12 years, among 10 deaths in the Saria Hasoun school in al-Farqan district, the Observatory and Syrian state television reported.

Hundreds of people have been killed since Tuesday as the government and its allies attempt to quash resistance in Aleppo's rebel-held eastern zone.

Syria's military and Russia's air force had paused their bombardment of eastern Aleppo, except for on the frontlines, for two weeks after a month-long offensive from late September to late October, but recommenced strikes on Tuesday.

The plight of civilians in eastern Aleppo was underscored on Saturday when the World Health Organisation reported that bombing had put all the hospitals in the besieged district out of operation. An official with a rebel group based in east Aleppo said there were still no working hospitals there on Sunday.

The army and its allies began some ground attacks on Friday. The Observatory reported intense clashes in Sheikh Saeed in southeast Aleppo and in Baeedain and Bustan al-Basha in northeast Aleppo.

Lebanon's Hezbollah militia, one of the army's main allies in the fighting, said on Sunday that clashes were taking place in the Hanano district of northeast Aleppo and that pro-government forces were bringing big reinforcements to the city.

An inquiry by the United Nations and the Organisation for the Prohibition of Chemical Weapons has said Syrian government forces have used chlorine gas in barrel bombs at least three times during the war. Damascus denies it.

Syria also denies using barrel bombs - improvised ordnance made by oil drums filled with high explosive and shrapnel and dropped from helicopters. Their use has been condemned by the United Nations for causing unnecessary suffering.

Air strikes continued to hit several districts of eastern Aleppo early on Sunday, the Observatory said, after at least 54 people were killed in bombing on Saturday.

So far, around 240 people have been killed in bombing in eastern Aleppo and the rebel-held countryside to the west of the city since Tuesday, it added.

Staffan De Mistura, the envoy of the United Nations secretary general, arrived in Damascus for talks with Syrian Foreign Ministry officials on Sunday.

Foreign Minister Walid al-Moalem said in a televised news conference that De Mistura had discussed the possibility of an autonomous admnistration being set up in eastern Aleppo, but that Damascus completely rejected this. An elected city council oversees services in the rebel-held eastern districts.

Moalem said that the arrangement was intended by rebel groups to control distribution of food and that they were holding the civilians of eastern Aleppo hostage.

Asked in a televised news conference about Damascus' expectations from US President-elect Donald Trump, he said it wanted him to stop arming rebel groups and to curb regional powers who also did so.

The two medics identified the family they said was killed by chlorine in a film distributed online. It showed the corpses of four children stretched out on a floor, their lips blue and dark marks around their open eyes.

One of the medics, Abu al-Abbas, has a colleague who lives on the same street, he said. Another was the manager of a hospital and said doctors had confirmed the cause of their death as gas poisoning. A rebel official, Zakaria al-Malahifji, from the Fastaqim group, also said they had been killed by gas.

Medics and residents in rebel-held areas have often accused the Syrian military of using chlorine in barrel bomb attacks on their areas, but the difficulty of reaching besieged districts makes it hard for international agencies to verify this.

Syria and Russia have also accused the rebels of using toxic gas in shells, including during a major assault on the western fringe of the government-held zone in Aleppo early this month.

Aleppo has become the focal point for fighting, as the army and its allies attempt to end insurgent resistance there, alternating intense bombardment and ground attacks with offers to rebels to quit the city during periods of reduced bombing.

The use of siege and bombardment tactics has previously forced rebels to surrender other encircled areas such as the large town of Daraya southeast of Damascus, seen for years as a stronghold of the rising against Assad.