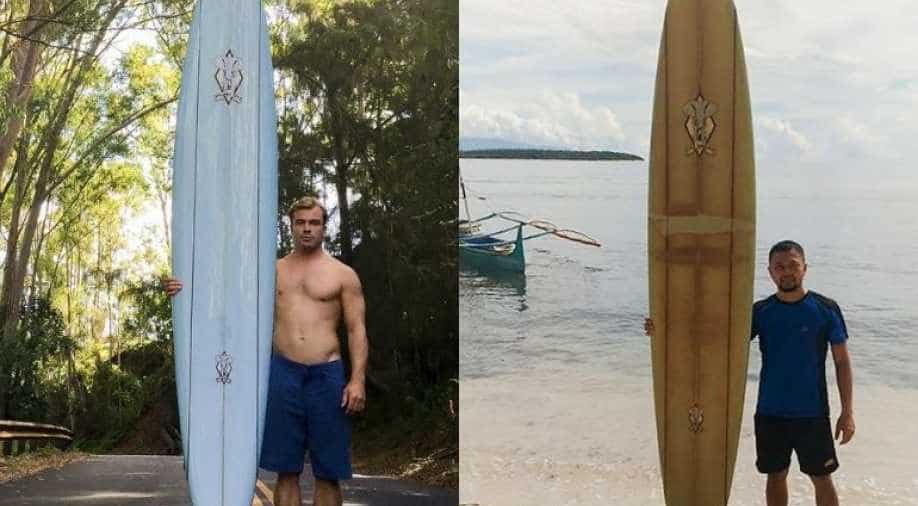 Doug Falter (l) posing with the board and Giovanne Branzuela (r) also being photographed with the same boat Photograph:( AFP )

The surfer was 'certain' he would never found the board again

Surfer Doug Falter thought it was a "joke" after he saw a picture of his board lost in Hawaii reaching the Philippines.

Falter lost his board two years ago in Waimea Bay and was informed by social media that it had travelled more than 8,000 kms (5,000 miles) near the island of Sarangani in the southern Philippines.

"When I saw the picture of it, I couldn’t believe it, I thought it was a joke almost," the 35-year-old suffer said via Zoom.

He added that he was "certain" that he would never found the board again.

The board is now owned by Giovanne Branzuela, an aspiring surfer and a primary school teacher who bought it two months ago for 2,000 pesos ($40).

Branzuela said a fisherman found the board floating in the sea on August 2018, about six months after Falter lost it.

He was also surprised to know that the boat was used by Falter as he himself wants to learn surfing and ride the "big waves".

"For now I can use his surfboard. I told him (Falter) I will take good care of it," Branzuela said as he intends to give the board back to the original owner.