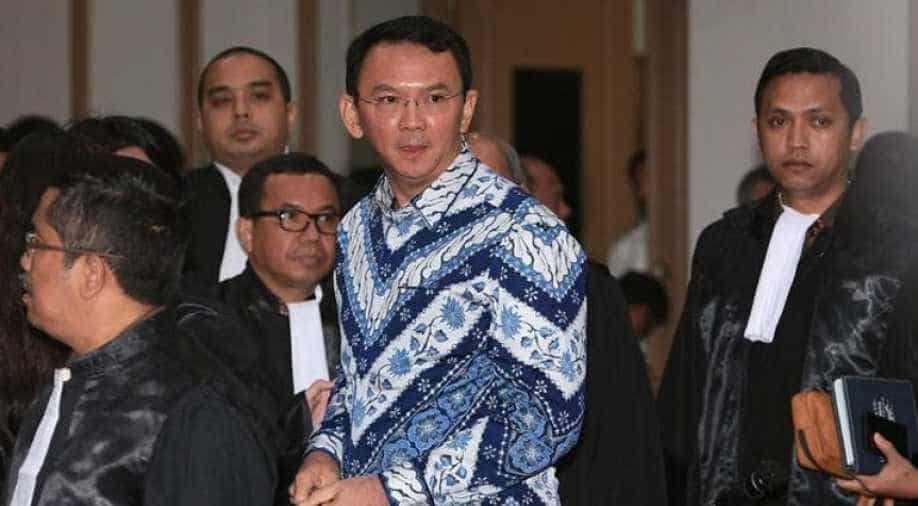 A crowd wearing red and white -- the colours of the Indonesian flag -- gathered outside city hall calling for Basuki Tjahaja Purnama's (in photo) release, and singing the country's national anthem. Photograph:( Reuters )

Supporters of Jakarta's Christian governor staged a colourful rally outside city hall Wednesday a day after he was jailed for blasphemy, in a case that has damaged Indonesia's image as a bastion of tolerant Islam.

A crowd wearing red and white -- the colours of the Indonesian flag -- gathered outside the colonial-era building calling for Basuki Tjahaja Purnama's release, and singing the country's national anthem.

"Let's fight for justice," said acting governor Djarot Saiful Hidayat, who was Purnama's deputy and has taken over his powers, to cheers from the crowd.

Purnama was jailed Tuesday for two years after being found guilty of blasphemy against Islam, a shock decision after prosecutors recommended only probation.

The jail sentence and his loss in last month's Jakarta's election to a Muslim rival amid the blasphemy controversy have stoked concerns that a much-vaunted brand of tolerant Islam in the world's most populous Muslim-majority country is under threat.

The United Nations and European Union have expressed concerns over the verdict while Amnesty International said it "will tarnish Indonesia’s reputation for tolerance".

Despite the claims he insulted Islam, Purnama, 50, retained a loyal following due to his determined efforts to clean up the chaotic Indonesian capital.

Over 1,000 supporters packed out the courtyard of city hall at the rally, chanting "Free Ahok".

"I admire Ahok, the way he leads, regardless of his religion," said Diana Sari, 49, adding she was a Muslim.

Acting governor Hidayat added: "Last night I met with Ahok and he wants me to convey this message: 'We have to respect whatever the judges have decided, but the fight is not over yet'."

Purnama, Jakarta's first Christian governor for half a century and its first ethnic Chinese leader, was transferred early Wednesday to a high-security detention facility outside the capital after hundreds of supporters descended on the jail where he was initially sent.

Islamic hardliners -- who led a series of mass protests last year against Purnama -- celebrated after the verdict was handed down, although some were angry the governor did not receive the maximum jail term of five years.

The blasphemy allegations stemmed from comments that Purnama made in September in a pre-election speech, in which he accused his rivals of using a Koranic verse to trick people into voting against him.