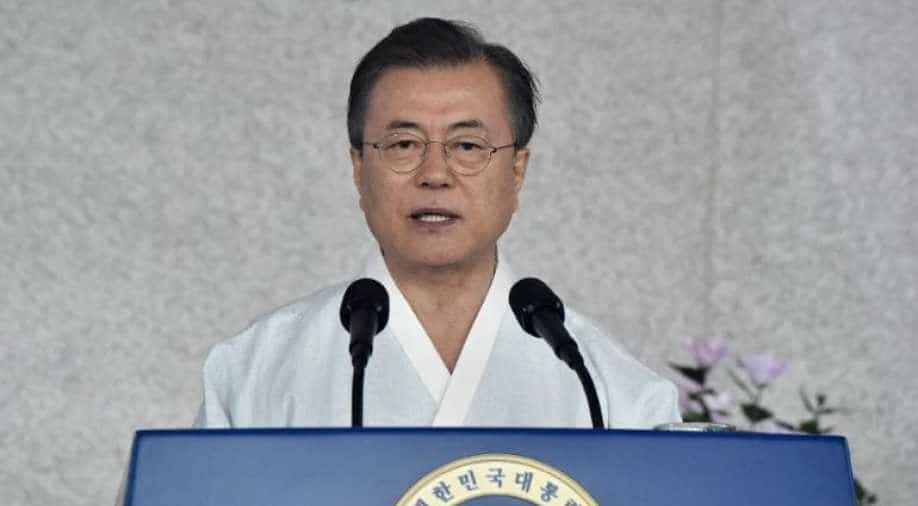 South Korean President Moon Jae-in has put more than 50 million won (around $41,000) of his own money into a fund investing in firms looking to replace Japanese suppliers. Photograph:( AFP )

South Korea's President Moon Jae-in said Seoul would increase military spending and urged the North to return to dialogue in a budget speech Tuesday that could infuriate Pyongyang with nuclear talks gridlocked.

Contact between North and South Korea stalled after the collapse of a February summit between North Korean leader Kim Jong Un and US President Donald Trump in Hanoi.

Since then Pyongyang has excoriated its neighbour over joint military drills with the US, and the acquisition of American fighter jets.

It is a far cry from the cross-border warmth of last year when Moon seized on the Pyeongchang Winter Olympics to broker the North-South discussion process and held three summits himself with Kim.

South Korea will increase defence spending by seven per cent to more than $42 billion next year, Moon told parliament, emphasising that "strong defence" was crucial for "self-determination".

"We will strengthen the core defence system by boosting assets such as next-generation submarines and surveillance satellites."

The announcement came after North Korea this month tested what it said was a submarine-launched ballistic missile that marked a "new phase" in its capabilities -- the most provocative in a series of weapons tests it resumed after an 18-month hiatus.

North Korea is under multiple sets of UN sanctions over its nuclear and missile programmes.

Pyongyang and Washington restarted working-level talks in Sweden this month only for them to quickly break down, with the North blaming the US for not giving up its "old attitude" and setting the end of this year as the deadline for Washington to change its stance.

It has also said it has nothing more to talk about with Seoul and condemned joint South Korea-US drills and the deployment of F-35A fighter jets in the South as rehearsals for invasion and violations of Seoul-Pyongyang agreements.

But Moon, who has long championed engagement with Pyongyang, held out hope for a breakthrough despite the setbacks, claiming that the deadlocked talks were the "last hurdle" before denuclearisation.

A "bright future" for the North would only be possible on the basis of a "peace economy" driven by inter-Korean economic projects, he said. "I urge the North to respond."