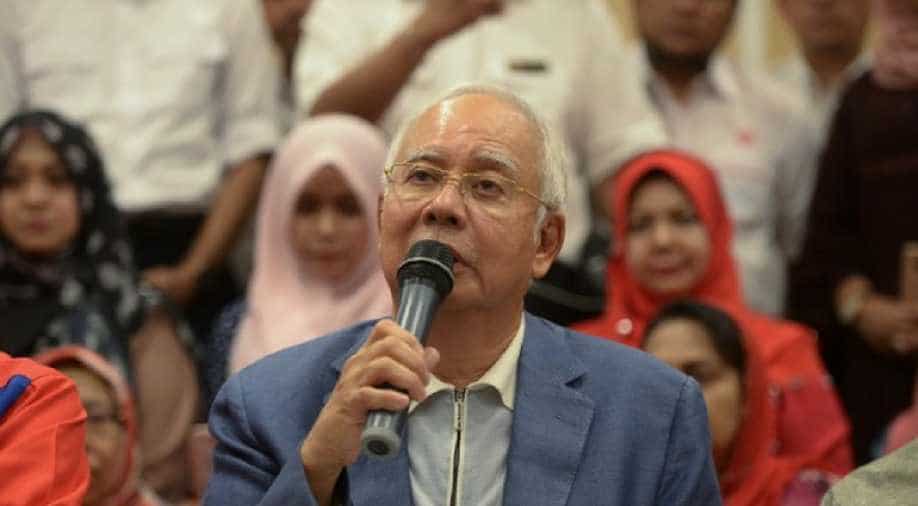 Police conducted an extensive search of the home of Malaysia's scandal-tainted former PM on Thursday that his lawyer decried as "harassment", as the new government presses forward with probes into a massive graft scandal after seizing power in historic elections.

Police arriving in a dozen vehicles converged on the home of corruption-tainted Najib Razak in Kuala Lumpur beginning late Wednesday, drawing crowds of journalists and onlookers.

A lawyer for Najib said officers were searching the home and a separate apartment in a "money-laundering" probe.

The search at Najib's home continued into Thursday afternoon.

The new government headed by 92-year-old former premier Mahathir Mohamad, who secured a stunning election victory last week, has vowed to probe allegations that Najib oversaw the looting of a sovereign wealth fund.

"The police just took some handbags and some clothes," Harpal said.

His mention of handbags prompted snickering on Malaysian social media.

Najib's wife Rosmah Mansor is ridiculed over her reported penchant for jet-set overseas shopping trips and a vast collection of designer handbags, clothing and jewellery, all symbolic -- critics say -- of the ousted government's lack of concern for economically struggling citizens.

Harpal said the house contained only personal belongings, though he added that police also were attempting to open a safe, the key for which had been "lost".

"This is harassment. Whatever... is in the house is not commensurate with the allegations," Harpal told AFP.

There was no indication that any arrests were planned.

Police officials confirmed the search to AFP but declined to give details.

The police action adds to a sense of rising legal peril for Najib, who was barred from leaving the country just days after the election over allegations that he, his family, and cronies looted billions from state investment fund 1MDB.

Last week's poll ended the six-decade reign of the authoritarian Barisan Nasional coalition. Mahathir had led the coalition from 1981-2003.

The search began just hours after the pardon and release from prison of Anwar Ibrahim, a top figure in the now-victorious political alliance.

Anwar, 70, had spent the last three years in jail under Najib.

Speaking to Australian media after his release, Anwar called also for a fresh look into another shocking scandal linked to Najib.

A young Mongolian woman, Altantuya Shaariibuu, was murdered and her body destroyed with explosives in Malaysia in 2006.

She had been the lover of a former close Najib associate who was accused of arranging kickbacks for the purchase of French submarines in 2002 at a time when Najib was defence minister.

A former Malaysian police officer Sirul Azhar Umar, who is now in Australian custody, has claimed that he was ordered by "important people" to carry out the killing who scapegoated him.

Anwar said Sirul, who later fled to Australia after being sentenced to hang over the murder, should be allowed to face a new trial back in Malaysia to get at the truth, The Australian newspaper said.

Najib has repeatedly denied any wrongdoing over the deal amid allegations that French submarine maker DCNS paid kickbacks of more than 114 million euros (US$142 million) for two Scorpene submarines.

Just before the police raid, Najib went to a nearby mosque for special prayers for the Islamic holy month Ramadan, which began Thursday in Malaysia.

Najib later tweeted a traditional prayer that calls for people to be forgiven of their sins.

As police searched Najib's home, spectator Mimie Lai, 45, said she had travelled to the scene to "see what happens to the ex-prime minister and all the scandals... involving him and his wife".

"I feel that finally, justice is coming, somebody heard... what the people are praying for," she said.

Anwar's release Wednesday captivated the nation, with ecstatic supporters and journalists mobbing him amid shouts of "Reformasi" (Reform) -- his rallying cry and Anwar declaring a "new dawn for Malaysia".

Anwar's old foe Mahathir is now an ally and has signalled his intention to eventually step aside so Anwar, his deputy prime minister in the 1990s, can take over.