Obama says US stands 'shoulder to shoulder' with Greece 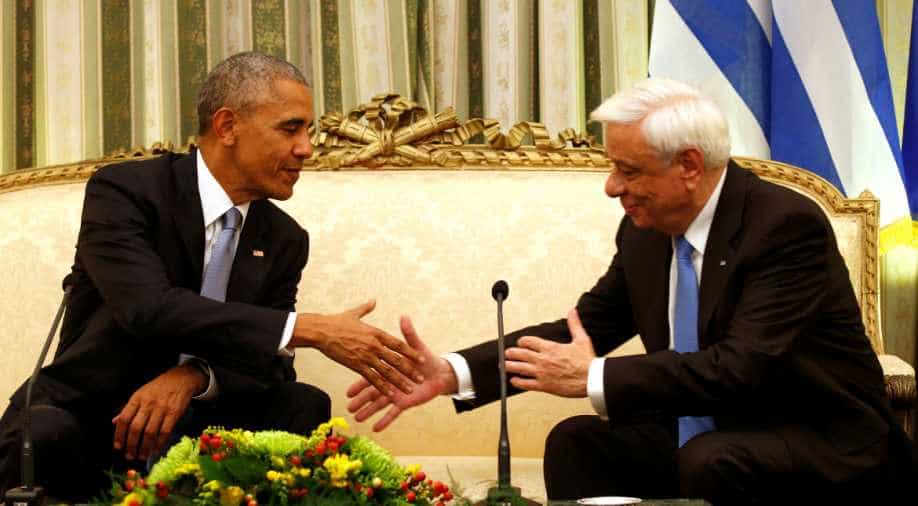 Greece signed up to a third economic bailout package of up to 86 billion euros ($93 billion) in mid-2015 but says that it needs a long-term debt restructuring to emerge from the worst economic downturn for generations. Photograph:( Reuters )

Barack Obama arrived in Greece on Tuesday on his last European tour as US president, and Athens said it held out hope that he will use his clout to help persuade the country's creditors to forgive some of its monumental debt.

Obama, who will be replaced in January by Donald Trump, was welcomed by Greek Defence Minister Panos Kammenos at Athens airport at the start of his two-day visit, the first by a US president to Greece since Bill Clinton in 1999.

"Greece has gone through very challenging and dramatic times over the last several years. It has been the policy of my administration to do everything we can to work with the Greek government and the Greek people to restore growth, optimism, to alleviate hardship," Obama told Greek President Prokopis Pavlopoulos in Athens.

"We are glad to see that progress is being made although we recognize that there are significant challenges ahead, and we intend to stand shoulder to shoulder with the Greek people throughout this process," Obama said.

He is expected to discuss the debt issue as well as the migrant crisis with Prime Minister Alexis Tsipras and President Prokopis Pavlopoulos and deliver a speech on Wednesday.

"We consider this visit will contribute to the effort to reduce Greece's debt," government spokesman Dimitris Tzanakopoulos told Reuters.

"The US president has repeatedly stated he wants to solve this huge issue before he leaves office."

Greece signed up to a third economic bailout package of up to 86 billion euros ($93 billion)in mid-2015 but says that it needs a long-term debt restructuring to emerge from the worst economic downturn for generations.

The country of 11 million people has also been caught in the crosshairs of the migrant and refugee crisis. Thousands are stranded in Greece after their onwards journey into Europe was sealed off this year as borders were shut in the Balkans.

"President Obama must use his visit to shine the spotlight not only on abysmal conditions for the tens of thousands of refugees stranded in Greece, but also on the failure of world leaders to adequately address the wider global refugee crisis," Amnesty's Europe Director, John Dalhuisen, said in a statement.

Obama, who is in Athens until Wednesday afternoon, was staying at a luxury seaside resort on a peninsula south of Athens, less than 15 km (9 miles) away from a disused airport that is temporarily housing hundreds of migrants and refugees.

Children played outside the abandoned terminal through washing lines strung with laundry.

"We want Obama to come and see us here, how we are living like prisoners," said Hatzi Naser, 42, from Afghanistan.

"He is the reason we are here, because of his army's war. We want him to come and see the filth we are living in."