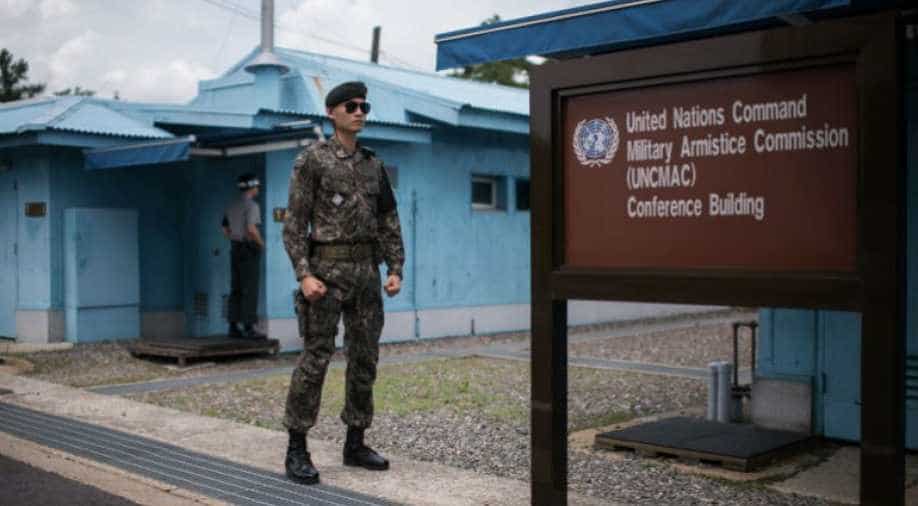 File photo: A South Korean soldier stands guard outside a pavillion in the Demilitarised Zone between North and South Korea. Photograph:( AFP )

Fewer than 100 North Koreans a month defected to the South last year, Seoul said Friday, the lowest for 15 years as Pyongyang and Beijing both tighten controls on movement.

A total of 1,127 North Koreans came to the South last year, down 21 percent from 2016, according to data from the unification ministry. It was the lowest figure since 2001.

The vast majority of defectors from the impoverished North, which suffers chronic food shortages and is subject to UN Security Council sanctions over its banned nuclear weapons and ballistic missile programmes, go first to China.

They sometimes stay there for several years before making their way to the South, often via a third country.

Defections across the heavily guarded Demilitarised Zone (DMZ) that divides the Korean peninsula are very rare, but this year there have been four, including a dramatic dash under a hail of bullets by a Northern soldier in November.

Another soldier escaped to the South across the DMZ in December but observers said there was no evidence of a trend.

Pyongyang has been bolstering border controls since the second half of 2015, putting up more guards and setting up high-tension wires to prevent its citizens from fleeing to its giant neighbour.

"On top of that, China has drastically strengthened crackdowns on North Korean escapees, repatriating them recklessly whenever they find them," Seo Jae-Pyong, an official of the Association of North Korean Defectors, said.

Many professional brokers who help arrange defectors` trips through China and Southeast Asian countries to the South have consequently gone underground, he said.

As of the end of December, more than 31,000 North Korean defectors had entered the South since 1948, when the two Koreas were officially separated into different states.

Female defectors continue to account for a lion`s share, with women making up 83 per cent of last year`s defectors.

It is easier for women to leave the North, as men all have assigned jobs, making any absence easier to spot for the authorities.