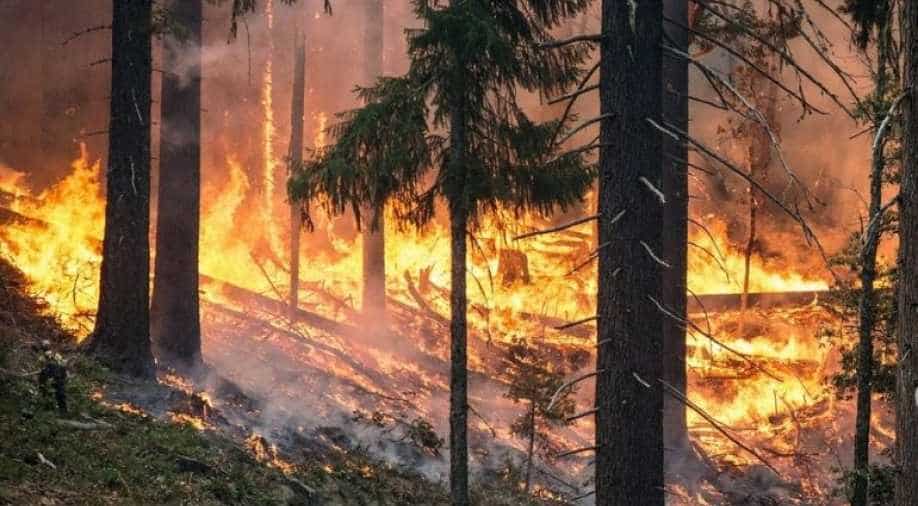 Ukraine has sent 1,200 firefighters to battle the blaze which officials in one village near the frontline said was detonating unexploded shells previously fired over by pro-Russian separatists

Nine people were killed and 14 have been hospitalised as a series of forest fires swept through part of the eastern Ukrainian region of Luhansk, the emergency service said on Thursday.

The fires, assisted by strong wind, threatened 31 settlements and engulfed an area of about 11,000 hectares the service said in a statement, adding that 120 people had been evacuated.

Ukraine has sent 1,200 firefighters to battle the blaze which officials in one village near the frontline said was detonating unexploded shells previously fired over by pro-Russian separatists.

Investigators were trying to determine the cause of the fire that has forced the evacuation of more than a hundred residents from nearby villages since it broke out on Wednesday following unusually hot weather.

More than 20 villages were under threat from the fire, fanned by dry conditions and strong winds.

The fire was blazing just a few kilometres from an area where fighting between Kiev forces and Russian-backed separatists erupts sporadically.

A ceasefire brokered two months ago has largely held and the authorities have not said whether the fire has affected the fighting.

Local officials in one village near the frontline, Stanytsa Luganska, said that numerous unexploded shells fired over by Russia-backed separatists were detonating due to the high temperature of the fire, threatening firefighters and local residents.

Regional officials said they had temporarily closed a crossing point into separatist-held territory due to the approaching fire.

The Ukrainian presidency said in a statement that it was important to establish what started the fire and how it had spread so quickly.

Ukraine has been hit by unprecedented heat waves this year, fuelling fires that are hard to bring under control.

"This is not the best year for our country in terms of natural disasters and other tragedies," Ukraine's President Volodymyr Zelensky said at a briefing on Thursday.

In July, forest fires in the Lugansk region killed five people and injured around 30.

Scientists predict that climate change will increase the frequency and severity of extreme weather events such as catastrophic fires.

Fires in April ravaged more than 66,000 hectares in the exclusion zone around Chernobyl in northern Ukraine, the scene of one of the world's worst nuclear accidents in 1986.