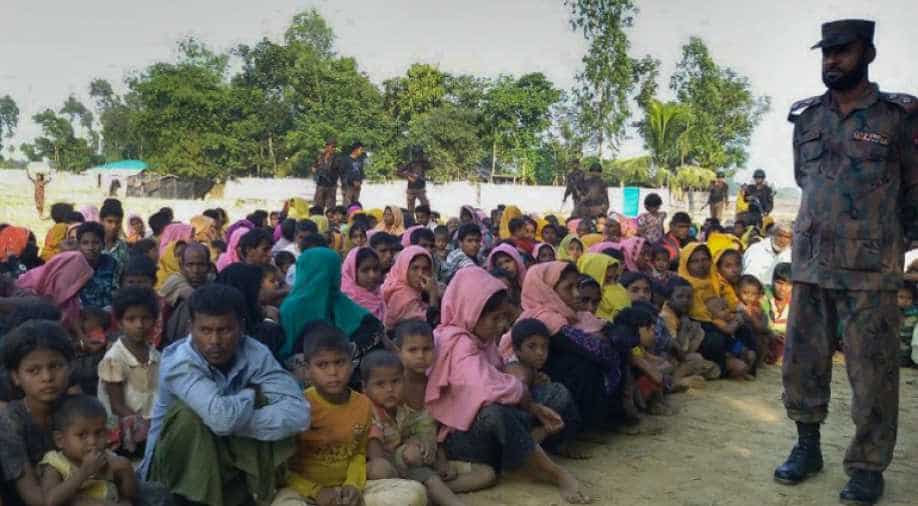 Myanmar's government, led by Nobel laureate Aung San Suu Kyi, has said the allegations are invented and has resisted mounting international pressure to protect the minority. In photo: Rohingya Muslims from Myanmar on December 25, 2016. Photograph:( AFP )

A commission probing violence in Myanmar's Rakhine state on Wednesday denied security forces have carried out a genocidal campaign against the Rohingya, days after a video emerged showing police beating civilians from the Muslim minority.

Tens of thousands of Rohingya -- a group loathed by many among Myanmar's Buddhist majority -- have fled a military operation in the northwestern state, launched after deadly attacks on police posts in October.

Dozens have died in the crackdown, while escapees now in neighbouring Bangladesh have claimed they suffered rape, arson, murder and torture at the hands of police or soldiers.

Myanmar's government, led by Nobel laureate Aung San Suu Kyi, has said the allegations are invented and has resisted mounting international pressure to protect the minority.

A state-appointed commission set up to investigate the violence released its interim report on Wednesday, dismissing claims troops and police have embarked on a campaign to force the Rohingya out of the country.

Its interim findings come days after the government detained multiple police officers over a video showing policemen beating and kicking Rohingya villagers. The footage, shot by one of the officers, has sparked outrage and undermined the government's blanket denials that soldiers and police have carried out rights abuses.

The size of the "Bengali" population, mosques and religious buildings in the unrest-hit area "are proof that there were no cases of genocide and religious persecution", it said in a statement carried in state media. Myanmar refuses to recognise the Rohingya as one of the country's ethnic minorities, instead describing them as Bengalis -- or illegal immigrants from neighbouring Bangladesh -- even though many have lived in Myanmar for generations.

The commission also found "insufficient evidence" of rape but added it was still looking into claims security forces committed arson, illegal arrests and torture of the Rohingya. It blamed the unrest on foreign-backed extremists, whom it said had attacked security forces in October to harm "the sovereignty of the state... with the intention of igniting riots and conflicts".

Legal action has been taken against 485 people arrested during the army's subsequent clearance operation, it added, without giving further details. Chris Lewa, from the Arakan project, said the commission had failed to properly investigate the widespread allegations of rape and rights abuses.

"The methodology is not credible, it's totally unprofessional," she said. "There is no corroboration from the villagers they are meant to have talked to. Their job was to verify the allegations and the report has not verified them."

The commission has faced opposition from across the spectrum since it was announced last month -- the second body created by Suu Kyi to try to heal the simmering religious divide in Rakhine state.

Rights activists dismissed the 13-member commission as toothless, pointing out it is headed by the vice-president, a former army general. Rakhine nationalists and many of the state's MPs have denounced it as a tool for government propaganda.

Malaysia's prime minister has accused Suu Kyi of allowing genocide on her watch, while more than a dozen Nobel Laureates wrote to the UN Security Council urging action to stop the "human tragedy amounting to ethnic cleansing and crimes against humanity" in northern Rakhine.

State media ran a statement from the Home Affairs Ministry on Wednesday, saying eight officers have now been arrested over the incident depicted in the video. "Police committed abuses as they tried to arrest some villagers who fled the village and some who were hiding in their homes," the statement said.

Myanmar has long discriminated against the stateless Rohingya. More than one million of them live in Rakhine, including 120,000 in displacement camps. Their movements are severely restricted as well as their access to basic services, like health and education.