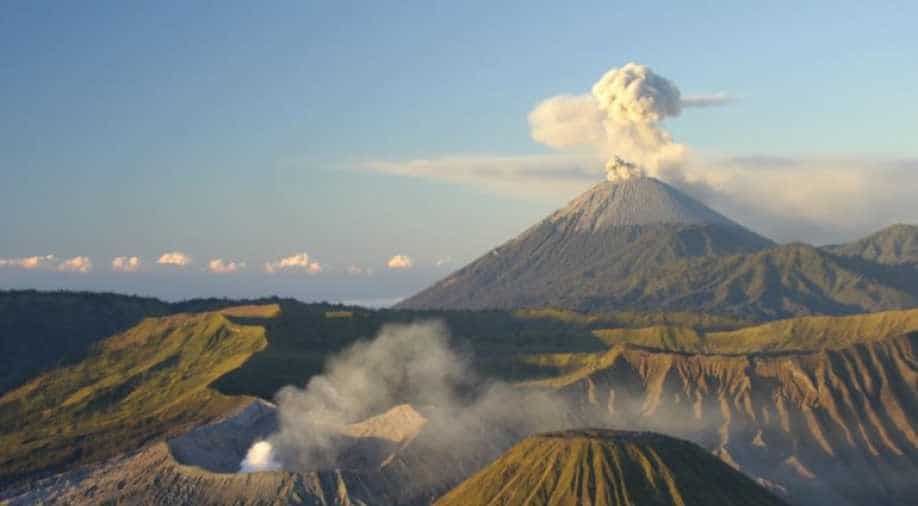 More than 122,000 people have fled their homes on the resort island of Bali, fearing that a rumbling volcano could erupt at any time, disaster officials said.

Mount Agung, 75 kilometres (47 miles) from the resort hub of Kuta, has been shaking since August and threatening to erupt for the first time since 1963. It could be a potential blow to the country's lucrative tourism industry.

Officials at an evacuation centre in Klungkung district said 122,490 people had left their homes, taking refuge at nearly 500 makeshift shelters or moving in with relatives.

In Indonesia, officials have announced the highest possible alert level and warned people to stay at least nine kilometres away from the crater. (AFP)

Around 62,000 people lived in the danger zone before the evacuations, according to Indonesia's disaster mitigation agency, but residents just outside the area have also left their homes out of fear.

Despite the significant increase in estimated evacuees, the government said it was prepared.

"In general the evacuation is going well, the logistics supply is sufficient for the evacuees' needs," Sutopo Purwo Nugroho, the agency spokesman, said on Thursday.

This week Indonesia's national disaster agency has sent face masks, mattresses, blankets and tents for evacuees, who have also been provided with food.

Five mobile sirens have been installed in the danger zone to warn residents in the event of an eruption.

Around 10,000 animals have also been evacuated from the flanks of the volcano.

Officials estimate there are at least 30,000 cows within a 12-kilometre radius of the mountain’s summit, and efforts to relocate them are ongoing.

The animals are extremely valuable to the evacuees, mostly farmers, some of whom have refused to leave the danger zone, the spokesman said.

The Indonesian Center for Volcanology and Geological Hazard Mitigation said Mount Agung was highly active on Thursday, recording 125 volcanic earthquakes between 12 am (1700 GMT) and 6 am.

"If we look at the magnitude, it continues to increase, yesterday we also felt several quakes with the magnitude of three on the Richter scale," said Kasbani, a head volcanologist at the centre who goes by one name.

Elsewhere, the threat of a separate volcanic eruption on the Pacific archipelago of Vanuatu prompted authorities on Thursday to order the compulsory evacuation of the entire island of Ambae, home to 11,000 people.

Vanuatu's National Disaster Management Office (NDMO) said it was the first time in living memory that an island's whole population had been moved because of volcanic activity.

The Manaro Voui volcano, which last erupted in 2005, sent up a plume of steam and ash over the weekend, prompting authorities to declare a state of emergency.

In Indonesia, officials have announced the highest possible alert level and warned people to stay at least nine kilometres away from the crater.

The airport in Bali's capital Denpasar, through which millions of foreign tourists pass every year, has not been affected, but several countries including Australia and Singapore have issued a travel advisory.