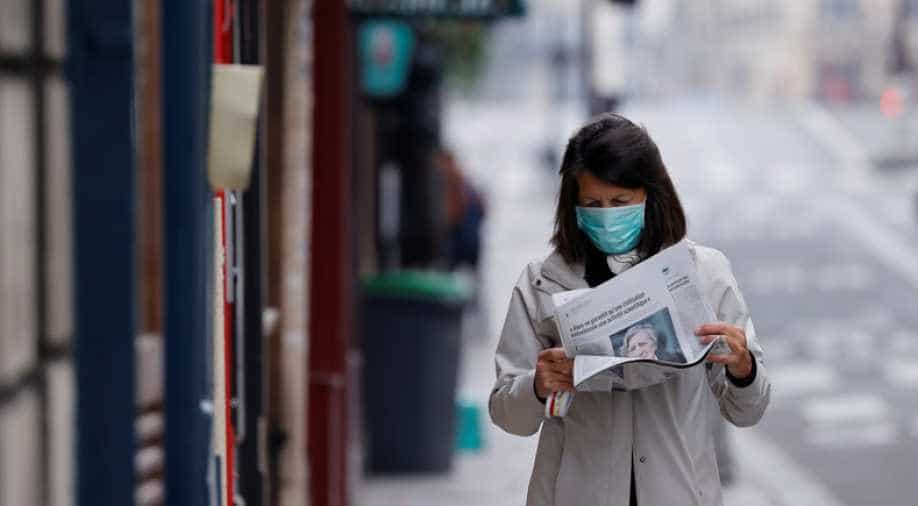 Fake news in the time of coronavirus Photograph:( Reuters )

In a message on Tuesday, the UN secretary-general expressed grave concern over the global 'misinfo-demic' about the novel coronavirus that is spreading "harmful health advice and snake-oil solutions."

UN chief Antonio Guterres warned that misinfo-demic about COVID-19 on various social media platforms such as WhatsApp is proliferating falsehoods and announced a new UN initiative to flood the internet with facts and science to counter the poison of misinformation that is putting more lives at risk.

In a message on Tuesday, the UN secretary-general expressed grave concern over the global 'misinfo-demic' about the novel coronavirus that is spreading "harmful health advice and snake-oil solutions."

"As the world fights the deadly COVID-19 pandemic the most challenging crisis we have faced since the Second World War we are also seeing another epidemic, a dangerous epidemic of misinformation," Guterres said.

"Falsehoods are filling the airwaves. Wild conspiracy theories are infecting the Internet. Hatred is going viral, stigmatising and vilifying people and groups. The world must unite against this disease, too," he said.

Urging nations to reject the lies and nonsense out there, Guterres announced a new United Nations communications response initiative to flood the internet with facts and science while "countering the growing scourge of misinformation, a poison that is putting even more lives at risk."
Spokesman for the secretary-general, Stephane Dujarric said there has been spread of disinformation about the pandemic on WhatsApp groups and other social media platforms that is not just wrong but that can be harmful to the efforts of treating the pandemic globally.
He said as part of the new initiative, the UN will be in touch with various social media companies, who themselves have been very active in trying to root out misinformation, suspending accounts of people that are actively pushing out wrong and dangerous information.

"And we think there's a way to do this without hampering everyone's right to free speech," Dujarric said.

He added that the right to free speech needs to be respected and it's a balancing act that is played out every day around the world, even in the most free democracies.

"It is clear that news organisations, social media organisations have responsibilities to make sure not to spread information that is just highly detrimental, if not dangerous,? to global efforts to control the spread of the virus.

In this regard, when asked about comments by US President Donald Trump that hydroxychloroquine can be used to treat the virus when medical professionals have said that medication can be dangerous, Dujarric said the UN chief's message about misinformation is not targeted at one particular individual or one particular Member State.

"It is something that we have seen the world over and is of concern to the secretary-general, and that's why he decided to issue the message," he said.

Guterres said that the ?vaccine? to treat the falsehoods and misinformation is trust in science, in institutions and in each other.

"I salute the journalists and others fact-checking the mountain of misleading stories and social media posts. Social media companies must do more to root out hate and harmful assertions about COVID-19," he said, adding that there must be trust in institutions grounded in responsive, responsible, evidence-based governance and leadership.
Guterres also underscored that mutual respect and upholding human rights must be "our compass in navigating this crisis."

"With common cause for common sense and facts, we can defeat COVID-19 -- and build a healthier, more equitable, just and resilient world."

Even before the pandemic officially began, the UN Educational, Scientific and Cultural Organization (UNESCO), issued warnings over some of the orchestrated misinformation campaigns designed to erode fact-based journalism.

"There seems to be barely an area left untouched by disinformation in relation to the COVID-19 crisis, ranging from the origin of the coronavirus, through to unproven prevention and cures', and encompassing responses by governments, companies, celebrities and others," UNESCO Director for Policies and Strategies Guy Berger told UN News earlier this week.

And the scale of the problem has prompted the UN agency leading the COVID-19 response, the World Health Organization (WHO), to add a mythbusters section to its online coronavirus advice pages.

Among the claims it refutes are that drinking potent alcoholic drinks, exposure to high temperatures - or conversely, cold weather - can kill the virus.