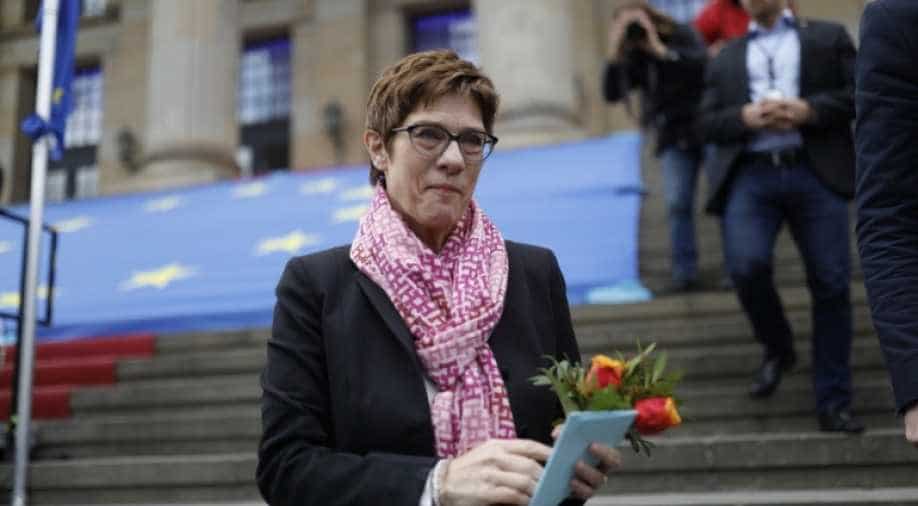 German media have been speculating for months over whether Germany's veteran leader Merkel may leave earlier as head of her left-right coalition government.

German Chancellor Angela Merkel's preferred successor, Annegret Kramp-Karrenbauer, said Sunday that she would not seek the top job before Merkel's term ends in 2021.

The woman usually dubbed "AKK" took over from Merkel as head of the centre-right Christian Democratic Union (CDU) last December, while the chancellor said she wants to serve out her 2017-2021 term.

"The chancellor and the government were elected for an entire legislative term and the citizens rightly expect them to take seriously the commitment that came with the election," said Kramp-Karrenbauer.

"So I can rule out the possibility that I will work deliberately to seek a change earlier," she told the Welt am Sonntag newspaper.

Rather, the CDU should work on a new policy platform and nominate its chancellor-candidate in the late autumn of 2020, she said.

German media have been speculating for months over whether Germany's veteran leader Merkel may leave earlier as head of her left-right coalition government.

Under one scenario, her junior partners the centre-left Social Democrats (SPD) could quit the "grand coalition" if they receive further election setbacks.

Upcoming electoral tests are the European Parliament elections this month and three state polls in Germany's ex-communist east later in the year.

In all those elections, the far-right and anti-immigration AfD could make further gains at the expense of the mainstream CDU and SPD parties.

Kramp-Karrenbauer acknowledged that the coalition with the SPD "did not emerge smoothly and doesn't always have an easy time cooperating".

On her relationship with Merkel, she said that "on some days I speak more with her than with my husband".

She stressed however that Merkel to her was neither a "personal friend" nor a "benefactor", and that instead, they are "fellow travellers".

"Our relationship is very good, just as it was before," Kramp-Karrenbauer told the newspaper.