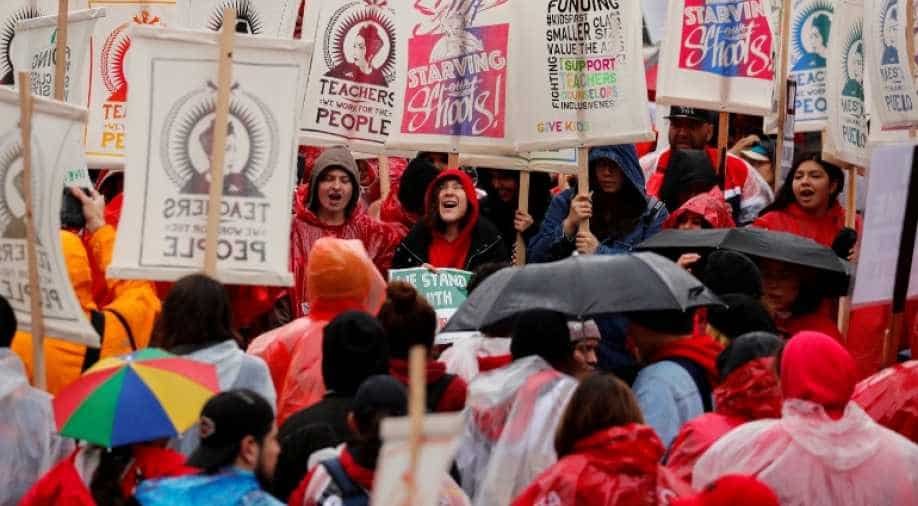 Students attend a march by some of the more than 30,000 teachers in the Los Angeles public school system. Photograph:( Reuters )

The strike, shattering 30 years of labor peace by Los Angeles teachers, has not completely idled instruction in the sprawling district encompassing some 1,200 schools.

Some 30,000 striking Los Angeles teachers demanding higher pay, smaller classes and more support staff from the nation`s second-largest school district walked picket lines for a second day on Tuesday, with no new talks on the horizon.

Negotiators for the Los Angeles Unified School District and the United Teachers Los Angeles have not met since union leaders rejected the LAUSD`s latest contract offer on Friday night, calling the proposal an "insult."

Asked on Tuesday afternoon whether the two sides had any intention of returning to the bargaining table, an LAUSD spokeswoman said: "Nothing is scheduled at this time."

The strike, shattering 30 years of labor peace by Los Angeles teachers, has not completely idled instruction in the sprawling district encompassing some 1,200 schools.

The district has enlisted administrators and substitute teachers to keep classes open on a limited basis through the strike, although LAUSD reported only about a third of its 492,000 public school students showed up on the first day of the walkout.

About 148,000 additional students are enrolled in LAUSD`s independently managed charter schools and have been unaffected for the most part by this week`s labor strife.

On Tuesday, however, a group of no more than four dozen unionized teachers at three LAUSD charter schools operated by a company called The Accelerated Schools walked off the job in a separate dispute they said was focused on job security.

It marked only the second charter school strike in the nation and the first in California, said Randi Weingarten, president of the American Federation of Teachers parent union.

The Los Angeles walkout followed a wave of teachers` strikes across the United States over pay and school funding, including in West Virginia, Kentucky, Oklahoma and Arizona. Denver teachers could vote to strike by Saturday if no deal on a new contract is reached by then.

Public sympathy appeared strongly aligned with the Los Angeles teachers` union, with more than three-quarters of those polled by Loyola Marymount University`s Center for the Study of Los Angeles saying they supported the teachers.

The survey, released on Tuesday, showed strike support running at 60 per cent or more across all demographic groups, including age, income and political leanings. Among parents with children at home, support topped 82 per cent, a finding reflected in the presence of many parents seen walking picket lines with the teachers, despite the inconvenience the strike posed for working families.

Aside from the education disruption, the teachers` strike could have implications for the political aspirations of Los Angeles Mayor Eric Garcetti, considered a likely contender for the 2020 Democratic presidential nomination.

Garcetti expressed support for the striking teachers on Tuesday, telling Reuters at a teachers` rally on Tuesday that the strike "is an important and righteous fight about the soul of our schools. Every parent, every kid deserves a decent-sized classroom where teachers aren’t overwhelmed by the numbers."

The mayor previously avoided taking sides in the dispute, over which he has little practical sway because the LAUSD is governed by an independently elected school board that appoints its superintendent.

The two sides remained at loggerheads on how much the district needs to invest in hiring staff, including nurses, librarians and other support staff.
Superintendent Austin Beutner said the district had offered staff increases that would cost $130 million a year - more than county officials have said is available - while the union`s demands would cost $800 million.

Beutner offered to join teachers in lobbying state lawmakers to increase education funding. "Join me on the bus," he said. "Let`s go."

UTLA negotiators want a 6.5 per cent pay raise. Teacher pay currently averages $75,000 in the LAUSD, according to state figures. The district has offered a 6 per cent hike with back pay.