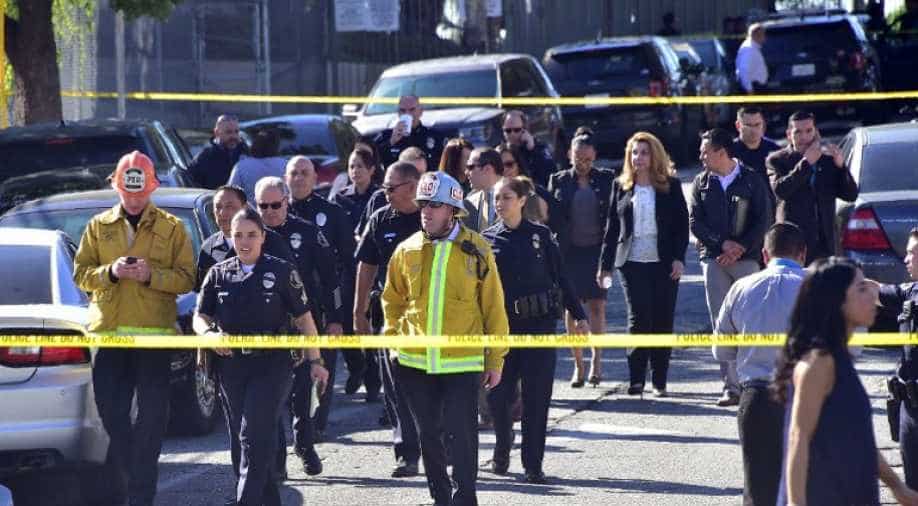 Police and fire authorities walk between roadblocks near Salvadore Castro Middle School in Los Angeles, California on February 1, where two students were wounded, one critically, in a school shooting. Photograph:( AFP )

A middle school shooting that left two students injured in Los Angeles was the result of a semi-automatic handgun going off by accident in a 12-year-old girl's bag, police said Friday.

A 15-year-old boy sustained a head wound, described as a "graze," while a girl of the same age was hit in the wrist in the incident at Salvador Castro Middle School in central Los Angeles on Thursday.

Both are expected to fully recover, and Los Angeles police said they did not believe the shooting was intentional.

An 11-year-old boy, a 12-year-old girl and a 30-year-old woman "had minor abrasions to the face area, some from glass," Erik Scott of the Los Angeles Fire Department said, adding that none of the three was struck by gunfire.

The suspect was arrested at the scene and charged in juvenile court Friday with felony counts of being a minor in possession of a firearm and having a weapon on school grounds.

The girl, who is not being identified by authorities because of her age, is scheduled to be arraigned Monday, according to the District Attorney's Office, which said it would not release any further information.

Some of her friends told reporters that she claims the gun "went off" when she dropped her backpack.

"At this time, the information suggests that this was an isolated incident, involving the negligent discharge of a firearm, where innocent children and a staff member were unfortunately injured," the LAPD said in a statement.

Speaking Friday on KNX Newsradio, Mayor Eric Garcetti said a single bullet apparently went through the girl's wrist and struck the boy near one of his temples before lodging in his neck.

Chief Steve Zipperman of the Los Angeles School Police Department said Thursday it was unclear how the gun wound up on the secure campus.

"We have laws that mandate that parents who own guns, any adult who owns guns, any gun owner has an obligation to ensure that gun is locked inside a home," he added.

The image of 12-year-old children bringing guns into the classroom has reignited the long-running debate on America's epidemic of gun violence and the ready accessibility of weapons.

Los Angeles City Attorney Mike Feuer said the incident should be a "call to action" for gun owners to ensure weapons are kept away from children while Los Angeles County Supervisor Hilda Solis said she was "horrified" by events.

More than 33,000 people die annually in the United States from gun-related deaths -- two thirds of them suicides -- according to the Centers for Disease Control and Prevention.